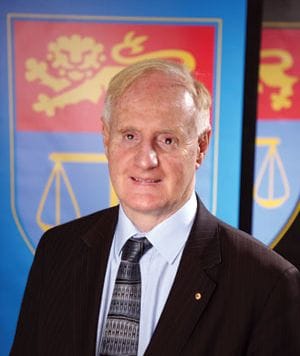 Internationally respected legal academic and disability rights advocate, Ron McCallum attributes a great deal of his success to the education and strong values that were instilled in him at St Bede's College, Mentone.

Blind since birth, the former Dean of the University of Sydney Law School was segregated in a residential school for the blind until he was welcomed into St Bede's College in Year 8 in 1963.

He spent the next three years at the school before winning a place in the law course at Monash University in Melbourne.

"I owe so much of my success to the great encouragement and support I received, especially from the De La Salle Brothers at St Bede's College", Professor McCallum explains.

"It was such an inclusive school with a very strong commitment to social justice. I have fond memories of fellow students and teachers reading textbooks out aloud to me in an era when there were no voice-activated computers like today".

"The Brothers there had a profound influence on my life and my career path, particularly Br Quentin O'Halloran who was a tremendous intellectual and Br Celestine Gavin who taught me French so well that I came to rely upon those classes later on when I was appointed an advisor at the United Nations", he adds.

Professor McCallum specialised in labour and employment law and taught at Monash University for 18 years where he gained great satisfaction from teaching a number of fellow graduates from St Bede's College who went on to become judges.

"I taught Tony Cavanagh who went on to serve as a judge on the Victorian Supreme Court and Shane Marshall who became a Federal Court judge", he said.

"It is a real credit to the school for the way it combines that strong commitment to academic excellence alongside the Lasallian ethos of reaching out to the most disadvantaged".

Ron McCallum made history in 1993 when he became the first totally blind person to be appointed to a full professorship at any Australian or New Zealand University.

He served as Dean of the University of Sydney Law School from 2002-2007 and has been asked by numerous state and federal governments to chair inquiries, including the 2012 inquiry into the Fair Work Act.

The former St Bede's student received the designation of Officer in the Order of Australia in 2006 and was made Senior Australian of the Year in 2011.

Professor McCallum has been able to draw strongly upon his own personal obstacles to become a powerful advocate for the rights of people with a disability.

He was nominated by the Australian government to stand as an independent expert for the United Nations Committee on the Rights of Persons with Disabilities in 2008 and served as Chair of the committee, overseeing the implementation of key treaties and conventions.

The Emeritus Professor urges current generations of students in Lasallian schools to focus on achieving high goals, through hard work, determination and courage.

"At one stage, I must have had about 20 miles of recorded cassette tapes in my office while I was teaching in Canada, well before I could use voice activated software", Professor McCallum explains.

"If you have a disability, you often have to work twice as hard to impress employers to give you the opportunity you need to take that next step in your career".

"And I've been very blessed along the way too through meeting people who have given me those opportunities and it all stems back to that initial welcome and support I received from staff and fellow students at St Bede's College, Mentone".