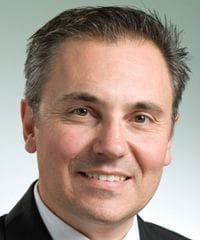 NSW Labor MP Guy Zangari has had a lifelong passion for Catholic education which he largely attributes to his schooling at De La Salle College Ashfield.

A graduate from the class of 1989, the Fairfield MP and opposition frontbencher has many fond memories from his years at the all boys school, especially the great pastoral care and dedication shown by the teachers.

"There were mainly lay teachers there who really fostered that distinctive Lasallian spirituality of reaching out to the disadvantaged and being of service to others", he explains.

"I had some great teachers in my years there who became lifelong mentors and friends- Michael Lewis, Bernie McGuckin and Joe Evans".

"The school had so much to offer with a very rich and diverse curriculum and it was here that I developed a real passion for Industrial Technology and Religious Education".

Guy felt so inspired by his teachers at De La Salle Ashfield that he decided to pursue a teaching career and undertook a Bachelor of Education degree through the Australian Catholic University.

He drew heavily upon Lasallian values as a teacher, volunteering to help senior students and teachers reach out to the homeless through the St Vincent De Paul Vinnies Van in Penrith and Parramatta.

Guy joined the Labor Party in his first year at university and felt inspired by the work of a number of other graduates from Lasallian schools who went on to pursue successful political careers.

"I saw Paul Whelan who also went to De La Salle Ashfield go on to become the NSW Police Minister and another Ashfield Old Boy, Michael Maher had gone into state and federal politics", Guy explains.

"There is an intrinsic link in the Lasallian charism to social justice, inspired by the Founder who after all, gave up a life of privilege to serve the disadvantaged by setting up schools for the poor".

Despite a busy schedule managing work across seven different portfolios on the Labor frontbench, Guy  has continued as an active member of the St John the Baptist Parish Pastoral Council at Bonnyrigg for the past five years.

He sees himself very much as a Lasallian and on a recent visit to Rome, Guy stayed at the Generalate and met with local De La Salle Brothers there.

"I also draw upon the inspiration of St John Baptist De La Salle in my work as MP for Fairfield where I'm often providing advice and support to refugees and asylum seekers as they settle into a new life in Australia", Guy adds.