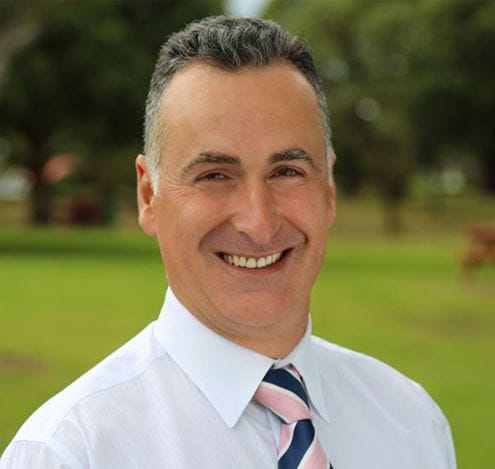 New South Wales Liberal MP John Sidoti attributes his skills as a public speaker and his commitment to fighting for fairer access to government services to his education at De La Salle College Ashfield.

A graduate from the class of 1988 at Ashfield, John made history in 2011, winning the inner-western Sydney seat of Drummoyne which had been held for nearly 50 years by the Labor Party.

He increased his margin in the seat at the last state election in 2015 and was subsequently promoted to the position of Parliamentary Secretary for Transport, Roads, Industry, Resources and Energy.

John has many fond memories from his years at De La Salle Ashfield and has maintained friendships with fellow students and some of his old teachers as well.

"I had a great Maths teacher, Michael Lewis who helped shape a lot of my values", he explains.

"There was such a strong sense of camaraderie at the school and it was a really inclusive, multicultural setting where we were taught to respect each others' views and beliefs even if we disagreed with them".

John says that same Lasallian spirit is alive and well in the NSW parliament today where he has formed a good friendship with a fellow Old Boy from De La Salle Ashfield, the Labor MP for Fairfield, Guy Zangari.

The Drummoyne MP says he would encourage young Lasallians to consider a career in politics because of the profound impact MPs can have on their local communities.

"I tell them how rewarding politics can be, whether it's through reducing congestion on roads and improving public transport through to improving facilities at the local hospital".

"I've often drawn on that Lasallian ethos of serving the community and my education certainly gave me the confidence to assert strong values in what can be a very tough and combative environment".