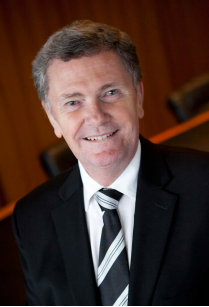 "The Principal at the time, Brother Peter McIntosh, encouraged me to compere Speech Night in Year 11 and 12", Mike explains.

"As soon as I left school at 18, I became a news reporter and never looked back from there".

Mike has worked for Channels Nine and Seven, the Sun Herald and music and talkback programs for 2GB, 2KY and ABC radio.

He has also lectured in electronic journalism at Macleay College and worked as a consultant to the NSW Government.

Mike also spent some of his high school years at De La Salle College in Bankstown and has a lot of fond memories from his Lasallian education.

"It had a major impact on me, especially the great commitment the De La Salle Brothers have to social justice and following the example of St John Baptist De La Salle of reaching out to the poor and the disadvantaged", he said.

Mike has maintained a close association with his former schools and was Master of Ceremonies at a dinner in 2006 marking the Centenary of the De La Salle Brothers in Australia.

He believes the values that were instilled in him throughout his high school years helped shape his decision to act as a Master of Ceremonies for charity events for organisations such as Care Flight and the Prince of Wales Medical Research Institute.

He also has a strong interest in tackling climate change and stood unsuccessfully as a Federal Labor candidate in the seat of North Sydney in 2007.

He now works as Executive Officer to the Vicar General and the Chancellor of the Archdiocese of Sydney and also writes a weekly column for the Catholic Weekly.

"I find it really rewarding to write for a newspaper where I can express important views that don't get the same coverage in the secular media, especially through areas like talkback radio where there is often only one side of an issue presented on social justice issues like the treatment of refugees and asylum seekers", Mike adds.

Mike says he is greatly honoured to take on the role of Master of Ceremonies at the Centenary Dinner for De La Salle College Ashfield at the Wests Leagues Club on 6 May next year and is looking forward to catching up with a lot of fellow Old Boys from Lasallian schools.