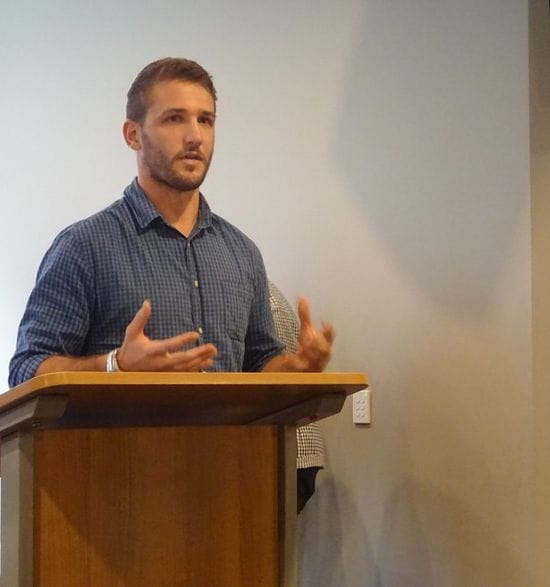 Construction engineer and charity fundraiser Rhys Jack has a strong passion for volunteer work which he believes is closely linked to his Lasallian education at Oakhill College in Sydney.

Rhys attended the Castle Hill school from 2002-2007 where he played a starring role in the college First XIII Rugby League team, eventually leading him to a professional football career with the Canterbury Bulldogs and the Wests Tigers.

But he says he only gained limited personal rewards from playing football and felt a stronger urge to reach out to the needy and the disadvantaged at home and abroad.

Rhys remembered the work of the Lasallian Foundation and its immersion programs well from his time at Oakhill College and approached its Chief Executive Officer Miranda Chow when he was 21 about what volunteer opportunities were available.

Miranda suggested he travel to Mannar in Sri Lanka where the De La Salle Brothers run a number of schools and orphanages for disadvantaged children in an area that was hard-hit by a decades-long civil war.

Rhys spent three weeks volunteering as a teachers' assistant and maintenance worker in the schools in Mannar and returned to Australia a changed person.

"I saw first hand how some of the schools and hospitals had been bombed during the civil war", he explained during a recent presentation at the Inaugural Young Lasallians District Conference in Melbourne.

Many of the people Rhys met in Sri Lanka were suffering from Post Traumatic Stress Disorder as a result of their war-time experiences and this led Rhys to take a stronger interest in mental health issues.

He became a volunteer with the Black Dog Institute and visited a number of high schools where he delivered presentations to the students to try and de-stigmatise illnesses like anxiety and depression.

Rhys' volunteer experience in Sri Lanka left him with an urge to do more overseas and he took up another project through the Lasallian Foundation in Bomana, Papua New Guinea where he helped again as a teachers' assistant and with construction projects around local schools.

His interest in PNG grew after he discovered his great grandfather was among the Australian soldiers who fought in the Battle for the Kokoda Track in 1942.

Rhys learned his great grandfather had suffered from Post Traumatic Stress Disorder as a result of his war-time experiences and this again led him onto more charity work.

Alongside Prashanth Shanmugan, he co-founded Project Kokoda in 2010.

Through fundraising programs including a recent trek to Kokoda, the organisation is aimed at raising awareness about Post Traumatic Stress Disorder and the devastating impact it can have on young war veterans and emergency personnel.

Rhys believes the values that united the Australian soldiers on the Kokoda Track also capture what it means to be a Lasallian today.

"On the four granite pillars the inscription at Kokoda reads- Mateship, Endurance, Courage and Sacrifice", he explains.

"They are core values that should guide us in how we live our lives and I'm sure they would resonate with St John Baptist De La Salle as well".

Rhys says he remembers those same values being passed onto him by Brother Malachy Yates during his time at Oakhill College.

"Brother Mal attended all our First XIIl training sessions and gave us a blessing before each game", Rhys told fellow Young Lasallians during his presentation in Melbourne.

"He later wrote to me as captain of the team, thanking me and the players for our efforts, even though we'd had a bad season that year".

"And it's those gestures from the heart that leave a lasting impression".

Rhys has a busy work schedule as a construction engineer for one of Lend Lease's major projects at Barangaroo in inner Sydney.

But he is keen on returning overseas for more volunteer work.

"I really admire what the Lasallian Foundation is doing in places like Sri Lanka and Papua New Guinea and I definitely want to contribute wherever I can".