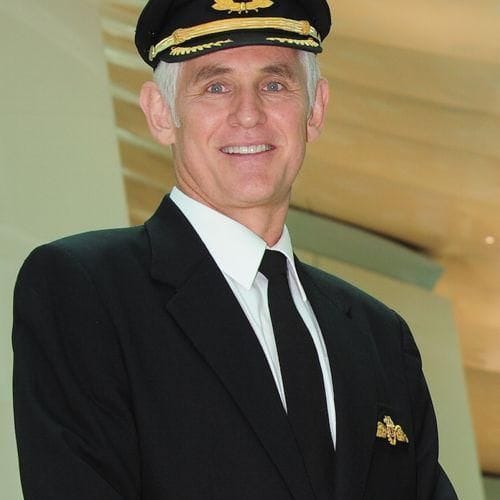 He is a familiar face to many airline passengers around Australia and is also a very proud Lasallian.

Senior Qantas pilot Stephen Ager features in flight safety videos on domestic and international flights and is the current President of the Old Collegians Association at St Bede's College, Mentone.

He has worked for the Australian airline for the past 32 years, playing a pivotal role in training programs for new pilots and in pushing for the introduction of the popular Airbus A380 on international flights.

Stephen attributes a lot of his success to the great work ethic and strong values that were instilled in him when he was a student at St Bede's College.

"I had a lot of great mentors including the Principal at the time, Br Bill Firman who encouraged us all to set high goals and work hard to achieve them and Brothers Paul Smith and Michael McCabe who both instilled in me the importance of strong leadership and teamwork", Stephen explains.

"Everyone was made to feel they could set their sights on achieving whatever they wanted to achieve in an environment where there was also a strong sense of community where you genuinely cared about your classmates".

Stephen said he received strong encouragement from his teachers at St Bede's to pursue a career in aviation and shortly after completing his Victorian Certificate of Education, he embarked on flight training at Moorabbin Airport

He began working for Qantas in 1984 and his strong leadership skills led him into working as a Training Captain for new pilots.

Stephen made history in 2008 becoming the first pilot to land the state of the art Airbus A380 on Australian soil.

He then took on a key role training new pilots and flight crews as they adapted to the jumbo passenger plane.

"It stems back to the Lasallian values that were passed on to me at St Bede's College, including the importance of serving others and becoming a good mentor to those embarking on their careers", Stephen explains.

"We're now continuing that tradition through careers nights run by the Old Collegians for students at St Bede's where former students can act as mentors to senior students".

Stephen is also a proud advocate for the Finian Foundation at St Bede's in which Old Collegians help raise funds to help financially disadvantaged families who struggle to cover school fees.

He is very grateful for the sound education he received at St Bede's College and believes alumni networks like the Old Collegians are a great way of helping graduates to contribute back to the school and to stay connected to the broader Lasallian family.