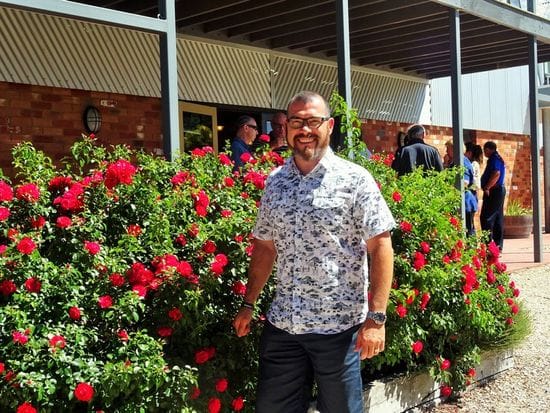 Kane Raukura's inspiring journey as a Lasallian leader stems right back to his own time as a student at the school he has taught at for the past 20 years.

"I really enjoyed my time at the school and the De La Salle Brothers and the other teachers were all fully versed with what it means to be a Lasallian in the way they nurtured a strong faith and a commitment to serving others", Kane explains.

Now as Lasallian facilitator and Head of Science at Mangere, Kane reflects back on what led him into a career in teaching.

"A friend of mine invited me to come along with him to an introductory lecture for prospective students at one of the teachers colleges in Auckland", Kane says.

"I wasn't sure what I wanted to do after leaving school, but as I was listening to the lecture, I had a real epiphany and knew instantly this was the right career for me".

"Then once I finished my training, I applied for a job at De La Salle Mangere and I've never looked back from there".

Kane has been immersed in the culture of the school since childhood which has in turn helped to enhance his role as a mentor to generations of students.

"It's been really rewarding to have former students come back and tell me how much they remember all the motivational and inspirational talks I gave them in class, even if they can't remember the first thing about chemistry", he laughs.

"So for me being a Lasallian is about touching hearts, giving students a faith in their God and in themselves and then most importantly that they can go on and touch other people's hearts".

Kane's efforts have been rewarded with a National Teaching Award in 2010.

He has no doubt played a pivotal role in inspiring countless students from De La Salle Mangere to aim high for prestigious careers in areas like law and medicine.

"I'm just extremely pleased to see students coming from lower socio-economic backgrounds and doing so well after emphasising to them that their background is no barrier and no excuse because if they're willing to put the effort in, they can indeed reach their dreams", he says.

"My own personal life was touched by that message when my wife was being treated in hospital after a serious car accident", Kane explains.

"Both the doctors treating my wife in the intensive care ward on the morning and evening shifts were students I had taught at De La Salle Mangere and I was very proud to have helped nurture them along their career path".

Over recent years, Kane has turned his attention to promoting Lasallian formation, through a number of highly regarded publications and prayer blogs which he sends around the world.

His 'Walking Daily with De La Salle' prayer is popular with Lasallians across not only our own District, but also in countries such as Singapore, the Philippines and Canada.

Kane also produces an excellent publication, the Messenger, a monthly resource for professional development for teachers and board chairs in Lasallian schools.

He is also a member of the board of the Lasallian Mission Council, working alongside his long-time mentor, Br Sir Pat Lynch as the two New Zealand representatives on that body.

"I just want to ensure that the legacy that we have through St John Baptist De La Salle and the Institute is not lost", Kane explains.

"As a Lasallian associate, I'm passionate about walking alongside the De La Salle Brothers to drive the Lasallian vocation forward, whether that's through encouraging young men to consider becoming Brothers or through being a Lasallian in other ways".

"I'm focused on encouraging my students to take that lifelong path of being a Lasallian in whatever way they choose to live out that vocation."

The incredible energy and focus which Kane brings to his vocation as a Lasallian educator also extends to one of his great hobbies- martial arts.

He holds a 6th degree Black Belt in Tae Kwon Do and has a leadership role in one of New Zealand's largest clubs.

"I've encouraged a number of De La Salle Mangere students to get involved and one of the beauties of martial arts is that it helps to give you a disciplined mind to see a task through from beginning to end."

"It's a great way to foster a sense of discipline and focus".