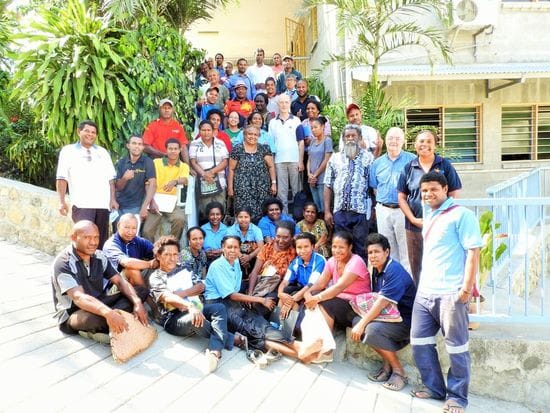 The Hohola Youth Development Centre has hosted a vibrant weekend retreat for 60 members of the Lasallian Family of Papua New Guinea this month.

The Director of Formation Br John Cantwell led the participants through a series of group discussions around Lasallian identity in schools and the life of St John Baptist De La Salle.

This included a session looking specifically at the religious educators who influenced the Founder from Jesus to St Francis Xavier and beyond.

The Formation Committee in PNG led a number of prayer sessions and regular time was set aside to reflect on scripture readings from St Matthew's Gospel, around the key themes of "Teaching, Proclaiming and Curing".

A team of teachers from De La Salle Secondary School in Bomana played a major part in the retreat, working alongside the Principal of the Hohola Youth Development Centre, Br Antony Swamy.

The retreat concluded with a mass at St Joseph's Cathedral in Boroko and a celebration dinner.

The Chairperson of the PNG Formation Committee, Louisa Opu said it was a very memorable retreat for all the participants.

"It was indeed very inspiring to hear from other schools what they do as Lasallians in their respective schools", Ms Opu said.

"One of the more memorable group discussions was centered around inspirational religious educators like St John Baptist De La Salle who can also be role models who we can look up to as modern day educators".