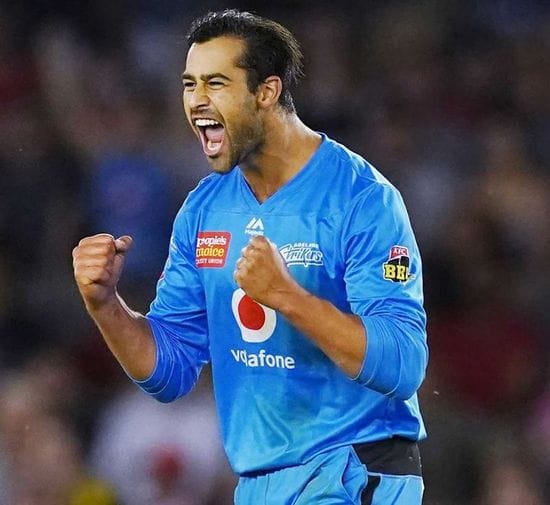 Wes Agar from the De La Salle Malvern Class of 2014, captained an ACC 1st X1 Cricket Premiership. Wes also had a brief stint on the staff  as AFL Trainee in 2015 before moving to Adelaide.

At the Allan Border Medal ceremony recently, Wes was named the Bradman Young Cricketer of the Year a wonderful honour and just reward for the terrific work Wes has put in since moving to Adelaide. Wes was in a Victorian development squad when still here but has really blossomed into a very promising fast bowler at Sheffield Shield and T20 level since moving to South Australia.

Fast bowler Wes Agar has been rewarded for a breakout domestic season, named the Bradman Young Cricketer of the Year at tonight's Australian Cricket Awards.

The 23-year-old, who made his state debut back in 2016, was re-signed by South Australia last winter having failed to earn consistent selection in previous stints with the Redbacks and his native Victoria.

Having returned to Adelaide in peak physical condition, Agar has starred with both the red and white ball this summer and is the only bowler in the country to be among the top-10 wicket-takers in all three domestic competitions.

Veteran Cameron White, a teammate of Agar's at both Victoria and the Adelaide Strikers, said the right-armer has been a completely different bowler this summer compared to previous seasons.

"He left Victoria a bit lazy and overweight but he's had a great season for South Australia and the Strikers," White told RSN last week.

"(He's) got himself fit and strong and as a fast bowler, that's important.

"His ball speed is right up now, I think he's in a pretty good space and he'll only improve in the next couple of years as well."

The standout feature of Agar's season has been his impressive pace, bowling spells in the low 140kms that have unsettled some of the best domestic batsmen in the country.

It has led to not just a consistent stream of wickets throughout the summer, but significant hauls that have helped put his side in winning positions.

Two of the six five-wicket hauls taken in the Marsh One-Day Cup belonged to Agar, highlighted by a stunning opening burst against Queensland at the Gabba that saw him dismiss Max Bryant, Usman Khawaja, Matt Renshaw and Joe Burns for single-figure scores in less than four overs.