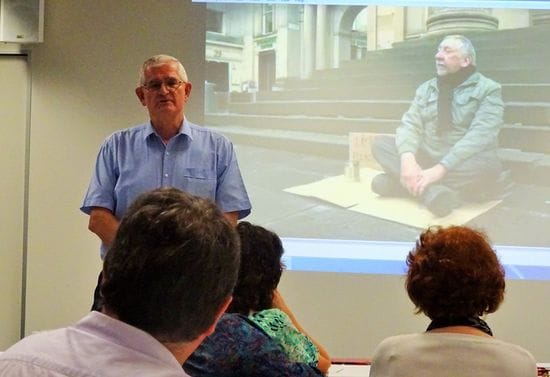 The Lasallian Facilitator at BoysTown, Brother Tim Peter shared his thoughts with Lasallian Leadership conference participants in Brisbane earlier this year on what makes a good leader, based on decades of experience, first as a school principal and later as a social worker.

He started working at BoysTown in 2012 and plays an active role assisting domestic violence victims and promoting literacy and numeracy programs for disadvantaged youth.

Brother Tim said good leaders need to build loyalty and trust with those they work with and should be prepared to take risks.

"The ability to inspire others is something that has to be learned", Brother Tim told the Lasallian Leadership Conference.

"As a leader, you need to acknowledge that you are the legacy of everyone who has gone before you."

Brother Tim is responsible for Lasallian induction programs for new staff at BoysTown and prepares a weekly reflection sent out to the organisation's 650 employees across Australia.

He said Lasallians have a good leadership role model in the Founder St John Baptist De La Salle who consulted widely with his peers and fellow Brothers.

"He showed that you need to not only listen well to what others say, but also be aware of what they're not saying", Brother Tim explained.

"Mistakes will happen, but it's critical to learn from them and grow in the role".

Brother Tim said his rich life experience prepared him well for his pastoral work at BoysTown.

He took a break from teaching in 2005 and was asked to manage La Salle Youth Camp on the NSW Central Coast. While at the camp Br Tim completed a course in hotel and restaurant management which led him to be involved in the kitchen at the Camp at Kincumber.

Br Tim then applied these skills to the bar at Sydney's Randwick Racecourse which he ran for seven years before being asked to work in welfare at BoysTown.  .

He also worked at one stage on a farm and had a short stint as a court reporter.

Br Tim said good leaders need to foster nurturing relationships with those they work with and be recognised for their integrity and authenticity.