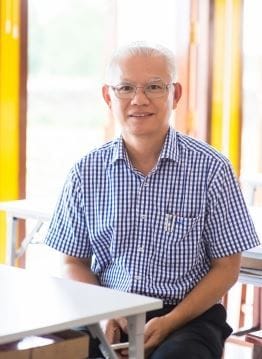 While much of Fr Quyen Vu SJ's life as a Jesuit has been spent in the education apostolate, he says he's looking forward to returning to Australia to become the next Provincial. 'For me it's a new journey, a new phase, a new adventure', he says. Fr Quyen has spent the last six years building a new Jesuit school in Cambodia, and spent the previous four years building a new Jesuit school in Timor Leste. He admits much of his life both before and after he joined the Society has been spent trusting in where God would lead him. 'I've never asked for a particular placement. It was just letting go and surrendering to God's will. For me, that has been my journey', he says. Video: Fr Quyen Vu SJ, talks about his journey as a Jesuit, and what he has learned during his time in Timor Leste and Cambodia

St Patrick's Parish in Asquith supported Quyen's family, and so they went to live in Hornsby. He spent a year in an ESL school, then spent two years at St Leo's College in Wahroonga.

His family then moved to the south of Sydney, and he went to the De La Salle-run Casimir Catholic College for Years 9 and 10, and then after a move to western Sydney, finished his secondary education at La Salle Catholic College in Bankstown.

After completing a Bachelor of Science at the University of NSW, with a major in computing and statistics, Quyen went to work. It was at that point he started to feel a call to something more.