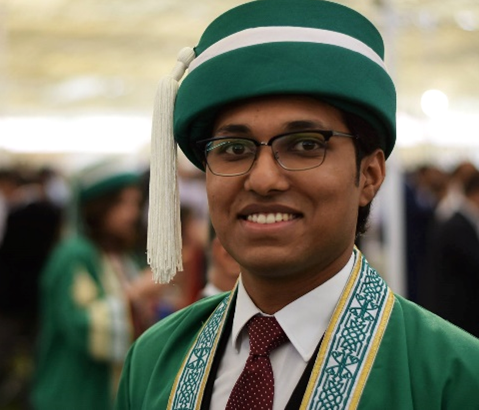 Schools, as social institutions, prize success in members of their communities. La Salle Higher Secondary School Multan is no exception. Its long heritage from its foundation by the De La Salle Brothers seventy-odd years ago has seen many alumni find success in Pakistani business and politics. One such was a previous Prime Minister.

Abeel Irshad, who graduated as top of his class in 2012, is now an intern doctor in a Multan hospital. He remembers his alma mater: "Along with the academics, I was always very fond of the extra-curricular activities carried out in our school. I used to take part in speech competitions, plays, spelling-bee competitions and sports events. The importance given to our English accent and hand writing left a lasting impact on our grooming".

Starting in the recognised Cambridge curriculum Section from 5 years of age, he notes, with respect and enthusiasm, Brother Herman Nanayakkara (recently deceased, a fine humanities teacher from Sri Lanka who spent over forty years as a Lasallian missionary in Pakistan). Equally remembered are Brother Shahid Mughal (current Principal of La Salle Faisalabad), Mr. Dominic Gohar, Mr. Tanveer Ahmad and Mr. Raheel Mukhtar. He admires them as leaving no stone unturned in helping him be successful in life.

He appreciates their valuable contribution, saying "Because of the excellent education I got from La Salle, I got admission in the Aga Khan University, Karachi, one of the best medical colleges in Pakistan". Mr. Hadayat Nazar, a current teacher at La Salle, reports also that it is quite difficult to get admittance to the public medical colleges/universities. Only the very best make the cut-off mark. (There are a number of privately managed medical colleges as well but they charge high fees).

Teaching and caring run in Abeel's immediate family. His father is a teacher at La Salle Higher Secondary. While his mother is a teacher-nurse at Nishtar College of Nursing. One of three boys in the family, Abeel has joined his elder brother Tabeel, also an intern doctor in Nishtar Hospital, Multan. Both have attained a MBBS in medicine, a profession that holds great status in the Islamic nation. The family used to live in Village 174/10-R, about 45 kilometres from Multan.

The city in the southern Punjab, was the choice for the Brothers' first school in Pakistan.  Called the 'City of Piris and Sufis', it is an important and very historic city, and an industrial and commercial centre. It has numerous schools, hospitals, universities and a strong Muslim culture. The Brothers welcomed many bright young farm boys, like Dr. Abeel, from the outskirts, so they could- and still- gain the advantage of a fine education under their humanistic and Christian influence.