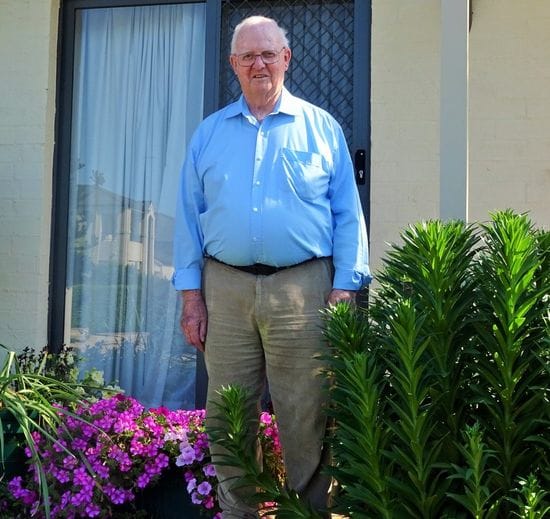 After over four decades as Principal at four Lasallian schools, Br Peter McIntosh has enjoyed an extremely active retirement as an internationally respected judge for the Arabian Horse Society.

On a hot summer day overlooking Oakhill College in Castle Hill with cows mooing in the school paddock, Br Peter reflects back on the great changes he has seen in education over the past 50 years.

Educated himself by the De La Salle Brothers in Bathurst, Br Peter believes he was destined to become a teacher from a very young age.

"My mother recommended I become a teacher and I was inspired by the Brothers who taught me in Bathurst, especially the Principal at that time, Brother Leo Caldwell", Br Peter explains.

He undertook a Bachelor of Arts degree at the University of Sydney covering English, History, Maths, Psychology and Education and began teaching junior classes in Haberfield before a much longer stint of 17 years at De La Salle College Ashfield.

Br Peter was Principal at Ashfield during its 50th anniversary in 1966 and feels honoured now to be invited back to be part of the school's Centenary celebrations next year.

He will be delivering an address at a special mass in May at St Mary's Cathedral to be celebrated by the Archbishop of Sydney, Anthony Fisher.

Br Peter says secondary schools have undergone a major overhaul over recent decades and he believes the changes have led to a far more diverse curriculum which then opens up more career opportunities for students.

"When I started teaching, secondary boys' education was very much focused on English, Mathematics and Science", Br Peter explains.

"So when I was Principal of St Bede's at Mentone and here at Oakhill in the 1970s, I employed Music and Drama teachers to expand the curriculum for the students".

''That all came about after I spent a year in Lasallian schools in the United States and saw what a broad range of subjects they were offering their students", Br Peter adds.

After completing a final stint as Principal at his fourth school, James Sheahan Catholic College in Orange, Br Peter retired from education, which then allowed him to direct more of his energy into a long-time hobby-Arabian horses.

The hobby was nurtured at Oakhill College in the 1970s when Castle Hill was more of a rural suburb and there was more room for a horse stable on the campus.

"One of the Brothers, Finbar Kelly, used to take a horse down and direct students on bus duty that way", Br Peter says with a chuckle.

"I started breeding Arabian horses and got some of the Oakhill parents interested through fundraising projects".

Br Peter then put the horses on show at the Castle Hill Showground, but became frustrated with the judges and ended up becoming a horse judge himself.

In 1995 he was invited to become the Australian national judge for the Arabian Horse Society and was then responsible for training and examining judges and writing rules for horse shows.

Br Peter remained on the society board for 12 years and he undertook extensive travel to conferences in France, Spain, Turkey, the United Arab Emirates and Syria.

"I was fortunate enough to visit the ancient city of Palmyra in Syria before it was destroyed in the recent unrest in the Middle East", Br Peter said.

"But it has been heart-breaking to see the great antiquities destroyed as a result of the fighting there".

Br Peter still meets members of the Arabian Horse Society once a month at a club in nearby Richmond and enjoys writing articles for their magazines.

The veteran De La Salle Brother says he is impressed by the way today's Lasallian schools are continuing to embrace the traditions set in earlier times and the way the world-wide Lasallian family has become more integrated thanks to better communications.

"It's great now to see Australian Lasallians travelling more regularly on pilgrimages to France, retracing the footsteps of De La Salle and such great Lasallian formation programs through our schools and BoysTown", Br Peter adds.

"When I visit a Lasallian school today, it's great to see so many laypeople taking on leadership roles in Lasallian formation which leaves me very optimistic about our future".