Lasallian Retreats back at Mainohana, PNG! 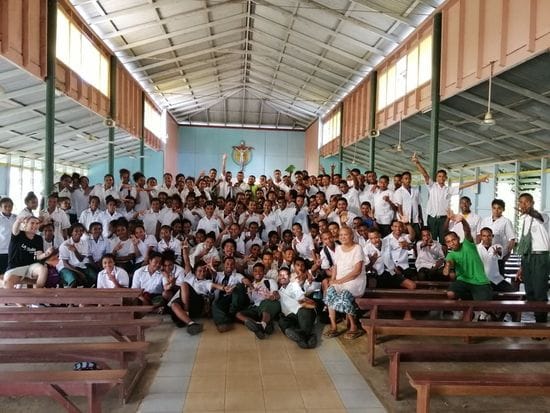 The Lasallian Volunteers and Youth Ministers in Port Moresby this year have been asked to facilitate retreats for all grades at Mainohana Catholic Secondary School for the first time in many years. The reconnection started after the leaders from Mainohana were invited to come to LSLSPNG at Hohola, thanks to a conversation with Madeline Fakepo (Affiliated Lasallian at Mainohana) last year. The students that came enjoyed the experience so much, a year 9-day retreat was soon planned for term 1.

The journey out to Mainohana is about a 3-hour drive along a bumpy highway, north-west of Port Moresby. You pass some beautiful scenery and make frequent stops to buy produce from village markets along the way. The final part of the road into the school is of questionable quality, but once you arrive, it is very peaceful and clean. Despite not being officially a Lasallian school, they have St. John Baptist De La Salle as a Founder of the school and an outstanding Lasallian Youth Group who meets weekly.

We based the retreat around the Year 9 Encounter Camps which happen at Lasalle Technical College, Jubilee Catholic Secondary and De La Salle Bomana Secondary in Port Moresby. Students started with icebreakers such as 'Jockey's Up' and the 'Cha Cha Slide', followed by sessions on getting to know each other and getting to know themselves. Other sessions included 'It's Cool to be at School', a special prayer burning ceremony and a mass to conclude the retreat. Overall feedback from students and student leaders was positive, saying they learned a lot and had plenty of fun throughout.

My personal highlight of Mainohana was playing with the local children after school, chasing and kicking a deflated soccer ball, dancing in the mud and them trying to teach me their local language. It was a very refreshing experience and reminded me why I love Papua New Guinea.

Retreats for year 10 and 12 are planned for term 2, in amongst the many programs we have to facilitate at Hohola and Bomana this term as well! I hope these programs can continue going forward with Lasallian Volunteers coming to Papua New Guinea in the years to come, as it is a lovely school filled with so many dedicated students who deserve a chance to have such retreats.