Home >  Blog >  Lasallian Volunteers Program - An invaluable experience, one that I'll forever be grateful for.

Lasallian Volunteers Program - An invaluable experience, one that I'll forever be grateful for. 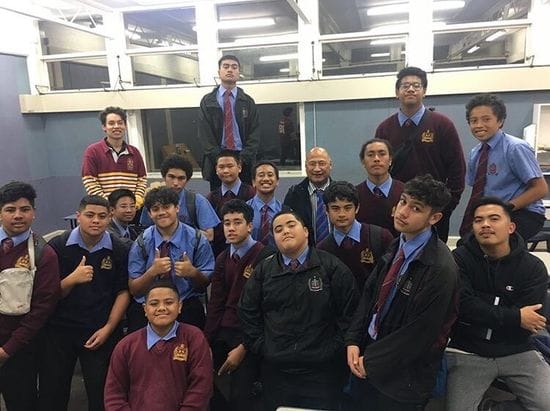 Andy Carloss wasn't sure what he was going to do after Year 12. He had been a Lasallian Youth Leader and enjoyed the opportunities that this had given him, such as going on the Indian Immersion trip, visiting the Anglicare Retirement Village regularly, being involved in the special swimming team as well as school camps and reflection days. He had enrolled in nursing at university but was feeling undecided about this decision and was thinking about other opportunities.

With a bit of encouragement from his mum and our Youth Ministers Franco and Matt, Andy applied to be part of the Lasallian Youth Volunteers Program. He had his doubts as it is a significant upheaval to leave the security and familiarity of your home life, as well as all your friends, but he took the leap of faith and applied. Looking back, Andy says it was the best thing he ever did. He was posted to an all boys' school - De La Salle College, Mangere, South of Auckland, NZ for eleven months.De La Salle College, Mangere is in an underprivileged school whose students come from primarily Pacific Island nations. The culture and size of the students were vastly different from that of what Andy had seen in Sydney, but Andy embraced being with these boys who were gentle giants. Living with the Brother's and being with the students, he enjoyed his new way of life, made strong connections with the community, and felt that he was getting more personally out of the experience that he was putting in. He thrived on the chance to serve others. Upon arrival, he started working immediately with Year 7 and 8 boys who had special needs with literacy. Also, within the volunteer program, you can choose a particular interest area, which for Andy was hospitality and sport, both of which he got the chance to teach and play regularly with the students.

While at the College, Andy also became a Debating Coach. Having no prior experience of debating, he threw himself into the challenge. He was unsure of how to proceed, but he enjoyed it and learned a lot about himself and his capabilities. He ran 'trial debates' for students to practice before the event and enjoyed coaching the boys and watching them develop and grow. This experience extended Andy gave him new-found confidence and took him out of his comfort zone. Seeing the boys exceed expectations was another highlight. Out of 110 teams, Andy's team came fourth, which was unexpected for the student's in a low decile school and they were also awarded as the top school in South Auckland.

During his time away, Andy was also given the opportunity to travel to Saint Paul's VI College partner school in Samoa. There he was able to experience village life, continue running retreats, perform Samoan dancing and continue to immerse himself and give back to the community. This school has now become the first De La Salle school in Samoa and continues the education and service of the Christian Brothers.

Andy has learnt so much from his experiences overseas. An important part is the strong community and values that the students in these schools hold. The 'brotherhood' is something that is talked about but more importantly is lived every day. Everything the boys do is for each other. If they go and buy food, it's not just for them, it's for everyone, if someone achieves, its everyone's achievement. There is a real sense of 'brotherhood' among the boys, they look out for each, and this continues after school. The alumni have a powerful connection too and return to mentor students in the school to ensure they are heading in the right direction.

Andy's experience overseas gave him the time and clarity to realise that he didn't want to go into a career in nursing as he had previously thought but wanted to teach. Andy now attends ACU and is studying to become a high school teacher.

Andy's advice for anybody who is thinking of taking this opportunity is to - just do it. The opportunity to serve, putting others before yourself and accepting new challenges has been an invaluable experience, one that I'll forever be grateful for.

The Lasallian Volunteers opportunity for 2021 is now open. For more information contact Joanne Nehme on 9795 6400 and take the leap of faith.