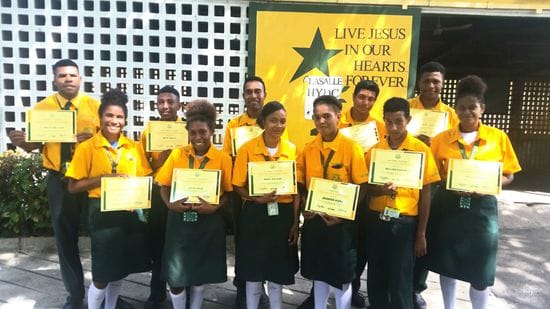 Lasalle Technical College, Hohola in Papua New Guinea, is an example of a school which strongly upholds the Lasallian values of Faith, Service and Community. Students often participate in volunteer activities across many different aspects of school life, such as Breakfast Club, Cleanathons and singing at Mass.

The Youth Ministry Team decided that a program should be created to acknowledge these acts of service, and implemented the Lasallian Youth Leader Program (LYL). The program was heavily inspired by the program run at Oakhill College in Sydney, and which volunteers Cameron Streeter and Matt Murrie are former students. Students who are looking to receive the (LYL) award are also given a handbook outlining the expectations of becoming a Lasallian Youth Leader, along with space to record their acts of service.

Depending on the activity, a certain number of points will be awarded to the student for their volunteer work. Once a student reaches 150 points of service they will then receive the (LYL) award, and upon earning another 300 points, the youth leader will be given a Gold (LYL) award. Students who happened to miss out on an opportunity for a nominated leadership role, can still work towards earning one. Students who become Lasallian Youth Leaders are regarded as leaders within the college community, and are considered role models who uphold the Lasallian values for the rest of the school.

As of the end of May 2018, Lasalle Technical College has 21 Lasallian Youth Leaders from across different grades, and nearly 200 students own a copy of the handbook. Since the commencement of the program, the LYL's have already achieved so much. Two successful fundraisers were held which helped to raise much needed funds. Students performed a musical depicting the life of the Founder and participated with Founder's Week celebrations and year 9 camps. The Breakfast Club now has more student volunteers helping each morning, catering for over one hundred students.

Upcoming events for the LYL's include further fundraising activities such as movie sessions at lunch and a Cleanathon in Port Moresby.

The Youth Ministry Team have received positive feedback from other staff members at the college who have noticed a growth in student involvement and behaviour improvements in some students. It's amazing to see teachers sign handbooks for students, acknowledging their acts of service, as it shows they believe the program is a good initiative for the school community.