Home >  Blog >  Lasallians called to reach out to asylum seekers

Lasallians called to reach out to asylum seekers 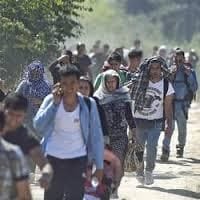 The Superior General Brother Robert Schieler has called on us to confront the commodification of migrants in a new Lasallian Reflection, an annual essay released in the lead up to Christmas.

Entitled "A Gospel Adventure: Confronting New Poverties and the Culture of Commodification", it draws upon the parable of the Good Samaritan and calls on Lasallians to re-read the parable to help us respond to the poor in our midst.

The letter calls on Lasallians to draw upon the inspiration of St John Baptist De La Salle who set out over 330 years ago to reach out to poor children and provide them with an education, just as the Good Samaritan reached out to the half-dead traveller who lay rejected at the side of the road and offered him a place at the inn.

The Lasallian Reflection considers the tragic case of three year old Aylan Kurdi, an asylum seeker found dead face down in the surf at one of Turkey's main tourist resorts.

The letter emphasises how this image put a human face on the dangers faced by hundreds of thousands of desperate people, risking life and limb to seek a new life beyond their country of origin.

The Lasallian Reflection condemns developed countries making agreements to resettle migrants in third world countries in exchange for tens of millions of dollars of aid money, describing this as a form of cross-border commodification.

It also condemns other forms of commodification in modern society including child pornography, child labour and organ and child trafficking where young people are treated as "saleable"objects.

The Reflection calls on Lasallians to act to support vulnerable neighbours who are sold and used and to offer a radical welcome, the oil of mercy, compassion and inclusion.

It emphasises how Jesus gave us a blueprint in the Parable of the Good Samaritan of what our Gospel Adventure involves and we should not fear the migrant or the poor, and in fidelity to our Lasallian identity and ideals, we can discern what is right and just.