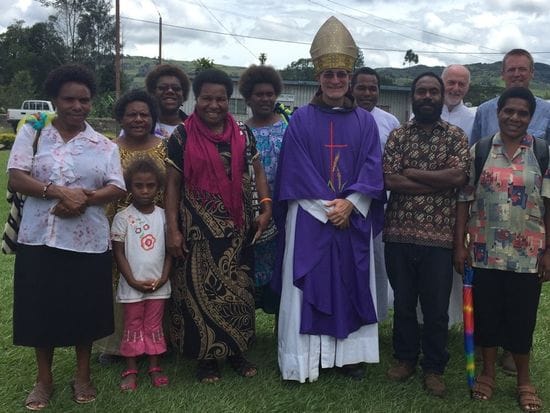 The Bishop of the Mendi Diocese in the Highlands region of PNG, The Most Reverend Donald Lippert has celebrated a Dedication Mass for students and lecturers as they resume the 2016 academic year at Holy Trinity Teachers College in Mount Hagen.

The Lasallian teachers college has been at the forefront of teacher education in PNG since it began training primary school teachers nearly 60 years ago.

Graduates from its programs go on to have an inspiring impact on the lives of primary students in some of the most remote parts of Papua New Guinea.

The De La Salle Brothers' involvement with the college stretches back to 1979 and the college has grown to now boast an enrolment of around 500 students from across PNG.

The Sisters of Mercy also had a 40 year association with Holy Trinity Teachers College which ended in 2010.

Staff and students were proud to welcome Bishop Donald to the college, particularly given he is himself a graduate of a Lasallian school- South Hills Catholic High School in Pittsburgh, Pennsylvania in the United States.

A Capuchin Friar, Bishop Donald has led the Diocese of Mendi since 2012 and is a former Apostolic Nuncio to PNG.

He is actively involved in planning celebrations this year to mark the Golden Jubilee of his diocese.