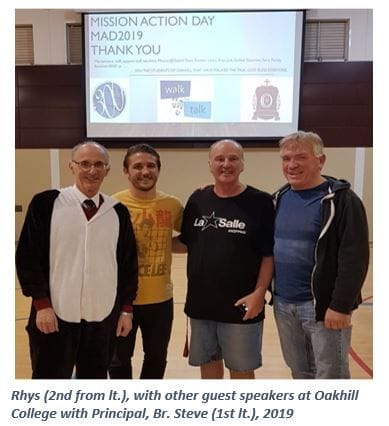 "I really tried to learn about myself during that time, and understand how I would like to make a difference in the world".

Like most younger people, Rhys Jack has travelled many roads discovering and developing the self, including where one can "make a difference" for the world. Growing up in a family of three boys in leafy Cherrybrook, on the outskirts of Sydney, he attended Oakhill College, Castle Hill from 2002, graduating in 2007. Attracted to sport in a proud rugby union school, he opted for rugby league! Under the expert tutelage of Br. Malachy Yates and other teachers, the team flourished. A man of many skills, Br. Mal gave the team a lesson in good table manners the day before a team presentation night! All good fun, remembers Rhys.

Further study at the local Macquarie University was for a business degree, while playing semi-professional Rugby League for a couple of years at the Bulldogs and Wests Tigers clubs. A career in the construction industry followed. At the same time, Rhys' life took a new road with a desire to keep up the Lasallian spirit that he had maintained from schooldays. Miranda Chow, CEO of the Lasallian Foundation Australia, engineered his travel to Sri Lanka as well as PNG to volunteer at some of the De La Salle High Schools in Mannar, Hohola and Bomana, helping to teach English as well as with various projects that were happening being of service, in whatever way he could.

"Gap-years" and volunteering may be somewhat remote for those finishing Year 12 at present, but Rhys sees it as "an incredibly eye-opening experience for any young graduate who wants to learn more about the world. The things I learnt on those trips taught me much more then what I was able to teach or give during the experience. I was very thankful that I did it when I did".

He remembers playing cricket and soccer with the kids in Sri Lanka every day for hours. They were full of energy and happy to just be outside running around freely. It was similar in PNG, playing Rugby League every day no matter how hot it was outside. The kids ran him ragged -always wanting to play games! "I probably most remember the people and teachers I met overseas though, in SL people like Br Yohan, who were going about rebuilding their community after the Sri Lankan civil war, and in PNG people like Mick Brosnan who was continually volunteering and organising containers of donated goods and also teaching the school boys about building and construction".

With this 'self-education' under the belt, he did more travel, finished two uni degrees, working at some absorbing construction sites, like Barangaroo, and kept up his fitness with football. "I really tried to learn about myself during that time, and understand how I would like to make a difference in the world". He had found in Miranda Chow, someone to broaden the quest, and passionate about partnering Lasallian youth development in Asia.

Those younger years of exploration has found fruit in several operations since. Rhys has become a strong advocate of the Black Dog Institute, because of his strong belief in the area of mental health, especially of young men. He writes and speaks on his blog, about it from his learnings, as well as promoting it on his website. "Putting yourself out there to share your experience" can possibly help someone who is struggling. Another venture that has helped the community was trekking the Kokada Trail in PNG in 2015. Rhys wanted the experience of relating to his great-grandfather's during the Second World War, and from that, with others, raised some funds and awareness for a number of Post Traumatic Stress Disorder (PTSD) charities.

Now, having recently started his own company, he has developed a greater appreciation for what small businesses go through: "I think particularly during the pandemic new businesses will be the innovators, who bring about new ways of doing things". Having a go and being creative never go out of style.