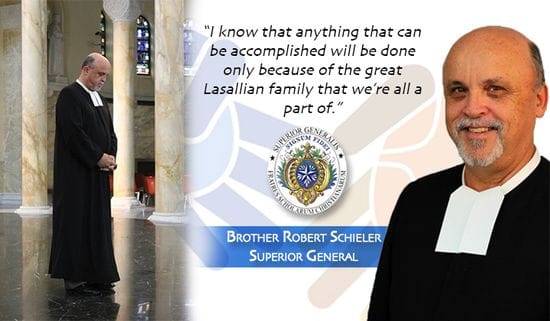 Once again the sexual abuse of children and young people is front page news across the world. You may be aware of some of the most recent public examptes of this that include: the tragic accounts published in the Grand Jury Report on the history of abuse in six dioceses in the state of Pennsylvania in the United States, the cover-up of the Chilean Bishops, the abusive behavior of Cardinal McCarrick in the United States and Msgr. Tony Anatrella in France, the impending trials of Cardinal Philippe Barbarin of Lyon France and Cardinal George Pell of Australia for their failure to report knowledge of abusive behavior by priests. These events follow on earlier Commissions of lnquiry (some of them still ongoing) into systematic abuse in, for example, Australia, England, Scotland and lreland. All of this has led Pope Francis on August 20 to address the issue once again in a letter to the People of 6od that must be read and reflected on by all of us in positions of leadership in the lnstitute.

The Pope's letter prompts me to request you to review your policies for the protection of minors in our care.' ln a letter, dated October 21't 2002, to all Visitors, Auxiliary Visitors, Delegates and President, the then Brother Superior Alvaro Rodriguez, recognizing that Districts are constituted as autonomous legal units with regard to the Brothers that belong to them, insisted that each District has a Sexual Abuse Harassment ProtocoJ in place. Since that time, Districts have responded and I am aware that some Districts participate in national and regional safeguarding programs for the protection of children. Where such programs do not exist, the Center of the lnstitute has provided programs and facilitated formation sessions for these Districts.

ln his letter, Pope Francis acknowledges that, "as an ecclesial community...we were not where we should have been, that we did not act in a timely manner; realizing the magnitude and the gravity of the damage done to so many lives. We showed no care for the little ones; we abandoned them..." As members of that ecclesial community, we must reflect on the extent that these words apply to our Lasallian commuflities and ministries.

While having in place policies and a systematic approach for the protection of children and young people is important and essential, more is required of leadership. The Pope rightly condemns clericalism'. We must honestly question ourselves if we too, at times, succumb to a form of "clericalism" in relation to our Lasallian Partners. Regardless, a system is not responsible, people are responsible. As leaders we must accompany those who have been betrayed by Brothers who have abused. We must walk the Via Dolorosa with the people of God in grief and pain, but also in love and hope. We rnust speak directly to parents and families about our mutual commitment to safeguarding their child's dignity and ensuring their child's growth. We must dialogue with our Brothers about building healthy and life-giving relationships in the community and ministry.

ln reviewing your policies I want you to make sure that they are updated and that all Brothers and communities re-read and review the policies. Clearly, all engaged in our Lasallian ministries should also be aware of these policies although I know that, in many countries, protection policies, with regard to our Lasallian ministries, are regulated and implemented by local and civil authorities.

Please click on the below District Policies to reveiw: