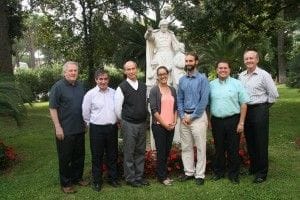 The Executive Director of the Lasallian Mission Council Merv McCormack travelled to Rome early this month to attend the inaugural meeting of the newly appointed International Council for Association and Lasallian Educational Mission (CIAMEL).

Merv represented the Pacific Asia Regional Council (PARC) at the meeting from October 1-6 in the Generalate which was chaired by General Councillor Brother Gustavo Ramirez Barba.

Merv was joined by representatives from fellow Lasallian regions of North America, Latin America and Europe/Mediterranean and from Lasallian universities.

The International Coordinator of the Young Lasallians Antoine Beland was also among the group of CIAMEL members present for the meetings in Rome.

The new council was established by the 45th General Chapter with the aim of animating and directing Lasallian educational programs around the world.

CIAMEL's initial priorities include developing a new Guide to Formation aimed at supporting and training formators in the mission of Lasallian education.

The new council is also examining ways to reinvigorate pastoral ministry in the Lasallian network in contexts that are multicultural, multifaith or secular.