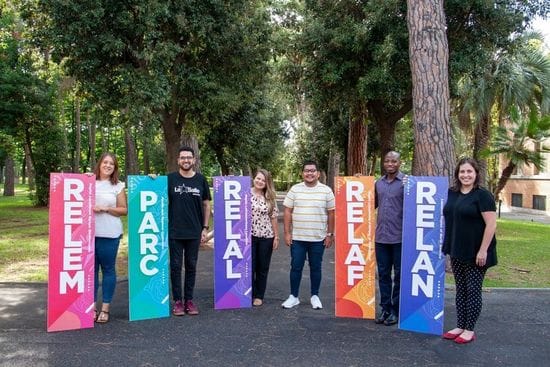 In September Damian Khoury embarked on a long trip to the Casa Generaliza, in Rome. There he met with the International Council of Young Lasallians for the first time. This being the first meeting of his 3-year term with the Council.

The other members of the Council are Eleonora Munareto, representing RELEM, Sarah Laitinen representing RELAN, Alice Gravelle Viera from the International Association of Lasallian Universities (IALU), Brother Bako Pierre Aymard representing RELAF, and the International Coordinator of Young Lasallians, Keane Palatino.Damian said, "This team of people were so welcoming and so passionate about what we were creating over our short time together but also about the mission. It was so uplifting to be in a room with people who care so much about this Mission and the Young People within it."

This newly formed team were not only on the same page with the mission but became friends over their time together.

Sustaining Joyful Communities, the theme of next year's  International Symposium of Young Lasallians to be held on November 1 to 7, 2020, was no small task to put together. Aiming to have all 33 Districts represented, multiple languages, cultures and contexts, this would be the start of a very long and thoughtful process.

The main purpose of the 2020 Symposium is to provide a common formation experience for all and to serve as an opportunity to share and address young people's hopes, dreams, fears, and challenges. The symposium will provide time to reflect on current realities of young people and consequently and this is our hope  will lead us into continued sustainability of the Young Lasallian movement.

The Young Lasallians Council had some time to prepare to present what they had created to the General Council and Br Robert Schieler. They received a really positive response and great questions which sent the ICYL ready to dig even deeper into their programming and planning.

Both the International Symposium and the Young Brothers' Assembly will take place at the same time in Rome. This will allow interactions between the two groups as each will endeavour to spell out their voice and actions for the 2021 General Chapter.

Together, the Young Lasallians and the Young Brothers, we can make great things possible.