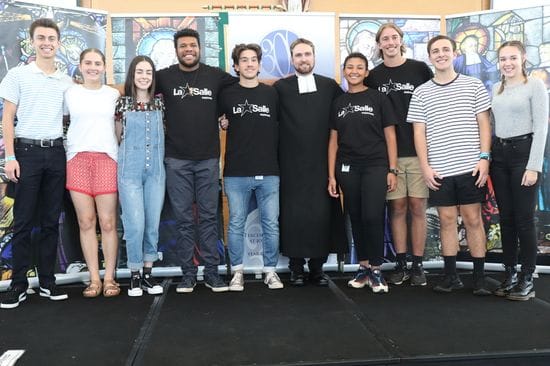 La Salle College held its annual Make A Difference Day (also known previously as Mission Aid Day) on Wednesday 15 May 2019, to coincide with St John Baptist de La Salle's Feast Day (celebrated today) which echoes his teachings of focusing and helping the least, the last and the lost.  We also celebrate this year the Tercentenary of the death of our Founder and Patron Saint of Teachers."

Through Make A Difference Day, La Salle College stand behind our Founder, St John Baptist de La Salle's teachings of helping the least, the lost and the last.

The day commenced with the Mass celebrated by Fr Michael Leek and Fr John Daly, the blessing of the Tercentenary badges, a Homily by Br Lewis Harwood and the Lasallian Volunteers explaining where funds for our Make a Difference Day will be going towards. This was then followed by the stalls and finally being entertained with La Salle's Got Talent.

In 1963, Br Eric Pigott, Principal La Salle College, Middle Swan, WA, began an annual event as part of the push to raise finances for the school to continue. It was completely a mad-cap event, and as such, it was eagerly awaited by all students. Incredible schemes were concocted to get those few extra cents a mini golf course on the Brothers' back lawn, raffles, pony rides, cake and sweet stalls, and many others. St Brigid's allowed the girls to come along and take part in the fun and so, for the boys, the day was the highlight of the school year.

This continued through to the nineties however, proceeds were sent to the missions, such as Nigeria, where Sr Gertrude, who was a teacher in the eighties was then based. The change of name to Mission Aid Day followed to reflect the true meaning of the day.This event is now well and truly an institution at La Salle College and in 2016 the change of name to Make a Difference Day, reflecting exactly what the students were doing while raising money for those less fortunate than themselves.

With this knowledge of helping the Lasallian Foundation, with supporting the least, the lost and the last, the day is then devoted to raising money and running stalls, which included a dunking machine, sumo wrestling, climbing wall, inflatable amusements, photo booth, temporary tattoos, zorb ball, face painting, coloured hair, food, drinks and activity stalls.