Home >  Blog >  Making a splash in and out of the pool

Making a splash in and out of the pool 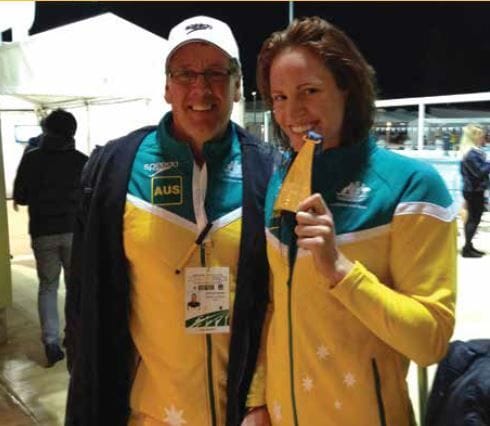 In less than 12 months the 2020 Summer Olympics will kick off in Tokyo and an Old Collegian from De La Salle College, Malvern, is hoping to make a splash in the pool. Renowned international swim coach Matthew Brown (1979), who swam for Australia at previous Pan Pacific Championships and Commonwealth Games, is now working hard outside the pool, coaching some of our top swimmers to go for Gold.

As the National Coach of the Australian Swim teams at the London and Beijing Olympics, Brown was instrumental in the Gold medal successes of Emily Seebohm and Brittany Elmslie, and when the Tokyo Olympics get underway next year, he is hoping for another medal success.

Brown is heavily involved in Chinese Backstroker Xu Jiayu's Olympics' preparation. "Jiayu won Silver in the 100 Backstroke at the Rio Olympics and since then has won the World Championship in Budapest in 2017. Jiayu is the current national record holder in backstroke in all distances.

'We are hopeful he will defend his records in Tokyo next year." Before his success as a coach Brown, made quite a splash in the pool as a swimmer himself. "I made several Australian teams and represented at the 1982 Commonwealth Games in Brisbane, where I finished sixth in the 400 Individual Medley, and at the 1983 Pan Pacific Championships, I finished in second place in the same event." "At the College I was a member
of the ACC Swim Squad for three years, from 1977 to 1979, breaking a few ACC records at the old 1956 Melbourne Olympic pool." "I swam Victorian State and National championships at that pool. It was always a full house for the ACC championships, it was awesome. "

After leaving De La Salle College, Brown completed a Bachelor of Sports Studies and a Coaching and Diploma of Coaching at Canberra College of Advanced Education or Canberra University as it is known today.
"At the same time, I was offered a place at the Australian Institute of Sport in Canberra which I attended while completing my studies."

"Towards the end of my swimming career I knew that I wanted to be involved in swimming as a coach."

"My old club coach in Western Australia offered me a job coaching junior swimmers. I stayed in that role for two years and then became Head Coach of a new program in Perth.I was there for 13 years until I was offered a role as Director of swimming at St Joseph's Nudgee College where I stayed for 12 years." "I headed back to Melbourne for two years as Director of Swimming at Surrey Park Swim Club and then returned to Brisbane two years ago as Head Coach of the Rackley Swim Team."

In his role with the Rackley Swim Team, Brown is involved on a range of levels, including managing staff, swimmers' programs, the club and the swim centre itself as well as training swimmers to compete at School, Club, State and national team levels.

"I'm up at 4:15 am to be at the pool by 5:00 am for a three-hour training session. There is always administrative work after training and then I'm back on deck at 3:00 pm for another four hours training. This is repeated six days a week and during competition season, seven days a week."

When he is not at the pool, and that is rare, Brown never strays far from the water. "I love to fish and still surf as much as I can in the warmer waters of the Tweed river region."

"I have a daughter Rosie who recently graduated with a Double degree in Nursing and Paramedicine."

"I think the most valuable legacy that I still cherish from my days at the College, was the camaraderie. I felt valued, both by my peers and teachers in any endeavour I chose to apply myself to."