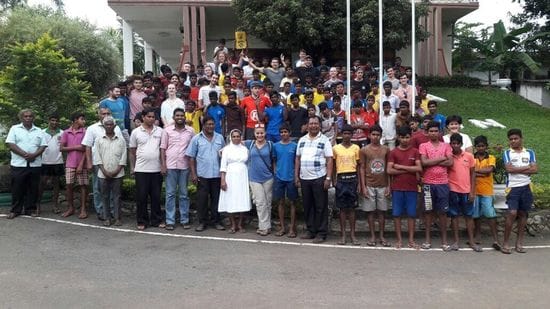 After many successful years travelling to India on the annual 'Coolies' Immersion in early 2017, and after much consultation with various offices of the De La Salle Brothers, Lasallian Mission Council and the Lasallian Foundation, a decision was made that the College would now be committing to supporting the needs of our Lasallian brothers and sisters in Sri Lanka, where the needs are equally as desperate and dire as those in India, however, the change of country and culture would continue to grow the students' understanding of the concept of "Lasallians Without Borders".

In addition to this, College Principal Peter Houlihan explained that after a recent visit he had made to Sri Lanka during the Easter break at the time, he met with Br Christy, the Provincial Leader for the Sri Lanka region and that a name change for the immersion was timely. The term 'Coolies', while having been used for all the right reasons for 11 years, now brought into the equation an adverse reference to colonial times when poor local labourers, (coolie) were used for the most arduous and lowest paid work. Therefore, it was decided the new immersion program would be called 'Yaluwo' meaning Friends. It is truly felt that this new title was and is a most fitting and engaging theme for the Year 12 Immersion to Sri Lanka. At the end of 2017, I was privileged to travel with the first De La Salle College 'Yaluwo' Sri Lanka Immersion, (previously 'Coolies' which travelled to India). Yaluwo, as mentioned earlier, means  'Friends' and friendship was in every way extended by the Diyagala community and was reciprocated by our De La Salle students. The group travelled to Sri Lanka to support the work of the De La Salle Brothers at Diyagala, Boys'Town Technical School, Ragama.

As Lasallians, we believe in the Good News of Jesus and that we are called to serve and reach out to the poor and marginalised. In doing so, we allow our own hearts and the hearts of those we encounter to be changed and to grow in faith, hope and love. Each ch day we were at Boys'Town, we were reminded of the importance of being present in the life of the other, and that as Lasallians, we strive to fulfil our mission as a member of the Lasallian community, "together and by association." This immersion allowed our students to stand in solidarity with fellow Lasallians, experiencing genuine need and gave them the experience to serve, to reach out by giving back and to work with and for the community at Diyagala, Boystown.

The Yaluwo Immersion is about being with people, listening with care and sharing lived experiences. Every evening we gathered in prayer and reflection, a special opportunity for to share observations, encounters and insights. It was life giving to be able to travel with sixteen of our Year 12 students and two of our staff and to witness them nurture a visible expression of our Lasallian spirit in action as well as continue the work of St John Baptist de La Salle in the Lasallian tradition.

Our Yaluwo Immersion is a true pilgrimage where we are invited to be in community with each other and fellow Lasallian brothers and sisters, to put our faith into action and to reflect on the part that God plays in our lives, "This is what Jesus asks of you: To do justice, to love tenderly and to walk humbly with our God," (Micah 6:8). 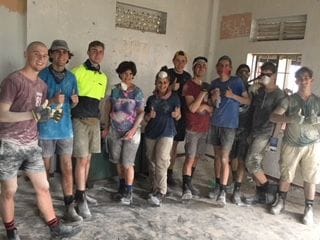 Some of the work we did consisted of restoring the music room (sanding and painting the walls), building the driveway fence, clearing logs and debris after a tropical storm, clearing the coconut and cinnamon plantations and weeding and clearing the vegetable patch. The late afternoons were spent unwinding, playing a match of either soccer, cricket or basketball with the Diyagala students. One of our more challenging experiences was a visit to Lasallian Community Education Services in Columbo and in particular witnessing the work of the Brothers at Henamulla pre-school. It is difficult to encapsulate what we witnessed in the slums but we left encouraged and hopeful by the work of the De La Salle Brothers, in particular, Br Mervyn fsc and Br Niroshan fsc who are so dedicated to the work and who very kindly hosted us for an afternoon. If there is anything to gain from the visit to the slums, it is that we saw firsthand the work of the De La Salle Brothers in these desperate and forgotten neighbourhoods, a true example of the work of St John Baptist de La Salle and working with the poorest of the poor, serving those most in need with respect, dignity and trust.

Finally, a most heartfelt thank you to Br Denzil fsc, Br Loyola fsc and Br Granville fsc for welcoming the Yaluwo staff and students in to the community at Diyagala Boys'Town for three weeks and allowing us to break bread with them, pray with them, share stories, work beside them and to provide support for the Diyagala students. The time spent with the Brothers, students and the members of the Diyagala community, talking, praying, playing games, singing and experiences are so memorable and special they will live in our hearts forever!