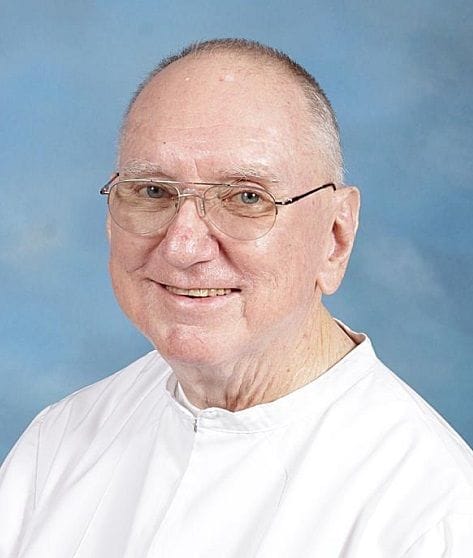 "Take time to think of what God wants of you." (Br Jeff)

Over fifty Lasallians Brothers, colleagues and friends gathered in the Chapel of Saint John Baptist de La Salle, (St Bede's College, Mentone), on the Feast of the Annunciation (25 March) to honour the life of Brother Jeffrey Calligan FSC.  Br David Hawke, Visitor, in welcoming those gathered, echoed the words he wrote when the news of Br Jeff's passing was received: "We remember Br Jeff as a Lasallian icon whose contribution internationally and in our own District has been invaluable.  Not only will Buttimer Institute graduates pay tribute to him but also the many Lasallians in our District, who attended formation programmes at Narooma and other venues where he made a significant contribution.  They will all hold a special place for him in their hearts".   Father Peter Matheson PP was the celebrant at the Mass.  The presence of representatives from Perth and Adelaide and the four Melbourne schools was its own testimony to Brother Jeffrey's great influence in what he called his "adopted" District.

Brother Gerard Rummery delivered a very moving reflection on the life of Br Jeff.  Brother Gerard reflected on a professional relationship and enduring friendship that first began in 1972 in Rome and subsequently spread across the USA, Europe and Australia.  Br Gerard spoke glowingly of Br Jeff's commitment to Lasallian studies; the genuine ways in which he accompanied so many teachers and young people; his love for the Institute; his passion for the "mission", and his deep understanding of living the "title" chosen by the early followers of Saint John Baptist de La Salle Brother.  "To be Brothers to each other and older Brothers to those entrusted to their care."

A Mass of Christian Burial was held at Saint Paul's School, Covington, Louisana USA on 22 March 2019.   A short quote from the funeral booklet speaks of Br Jeff's life as "a life devoted to the art of accompaniment that teaches us to remove our sandals before the sacred ground of the other."

Perhaps the last words may be left to Br Jeff: (When teaching a class of students) "You need to take time to discover what God dreams for each of you; take time to ponder, imagine and explore possibilities.  It is your duty to find that dream and to pursue it.  Your life is very precious be extremely grateful for it.  Take time to think about what God wants for you!"

"God is so good that he does not leave unrewarded the good work that is done for him and the service that is rendered to him, especially for the salvation of souls."

Click HERE to view the Eulogy given by Br Gerard Rummery.

Click HERE to view the Tour of Duty of Br Jeff.

May Brother Jeffrey Rest in Peace.