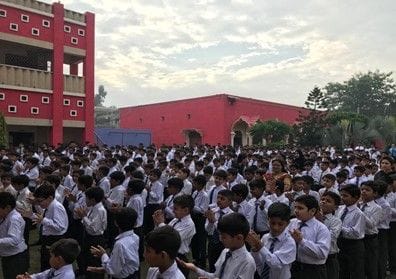 Religions, intolerance and violence go together many people believe in the modern world, while they proclaim peace and generosity in their own fields of endeavour. Lasallian schools in the District's Pakistan sector show how religions can operate harmoniously even in a politically defined official religion state (Editor).

Eid and its Significance

"The word Eid means 'feast' or 'Festival'. Each year the Muslim community celebrates two main feasts i.e. Eid-al-Fitr (festival of the Breaking of the Fast), which is celebrated at the end of Ramadan - the holy month when many adult Muslims fast, and Eid-al-Adha (feast of the Sacrifice), which is celebrated just over two months later at the same time when Muslims perform the Hajj Pilgrimage in Saudi Arabia. On both of the occasions many Muslims offer special prayers at their local mosques and have a three-day celebration with the family and friends, during which they have family gatherings; they give presents, and share feasts and sweets.

"The Government of Pakistan usually announces 4-5 Eid Holidays all over the country. Students get very excited when Eid is around the corner, and they like to talk about the outfits and shoes that they plan to wear on visits...

"The festive occasions like 'Eidan' (plural of Eid) provide us an opportunity to bring people close to one another irrespective of caste, colour, creed, religion, ethnicity or gender, and to sit at the table of brotherhood"
(Muhammad Imran, Teacher, La Salle Higher Secondary School, Multan)

Celebrating Eid in Solidarity with Christians

"Christians greet Muslims with the special greeting of 'Happy Eid' or traditionally they say 'Eid Mubarak' on this occasion. During Ramadan, in some La Salle Schools the administration organizes "Iftar Party" "(having meal together after breaking the fast) for all the staff members...Christian and Muslim.

"Religious harmony can be seen during the Eidan but also it is witnessed when the administration and staff gather for Christmas Party - celebrating the birth of Christwith exchanging gifts, sharing laughter and good music... Having the religiously diverse staff at... St. Joseph's High School Gujranwala, the oneness is daily witnessed when everyone recites the Lasallian Teacher's Prayer altogether, not to mention both the Christian and Muslim students say the Peace Prayer of Saint Francis of Assisi every morning during the assembly...We also make sure that before starting any official celebration there is recitation of the Holy Quran and the reading from the Holy Bible".

Mr. Muhammad Imran, teacher in La Salle Higher Secondary School, Multan also sees how celebrations "promote harmony and respect for all in the society... We are happy to state that the Brothers regularly arrange 'Eid Milan Parties' at the occasion of 'Eid-ul-Fitr' in the school to promote peaceful and respectful working environment at our school. Whereas, the Muslim staff members also organize 'Eid Milan Parties' after the 'Eid-ul-Adha'... We are grateful to God for providing us such a real environment at La Salle Higher Secondary School, Multan" He sees a unity in "an awesome and remarkable family".

Freedom of Religious Observances and its Implementations

Ms Hoorab notes that "Quaid-e-Azam Muhammad Ali Jinnah, the Founder of Pakistan during his Presidential Address to the Constituent Assembly of Pakistan on August 11, 1947 stated:

"Being a 'minority' in whatever part of the world that one lives in, is absolutely very challenging.  Christianity is being taught... (in Pakistani) Churches and Sunday Schools... There is a special subject of Catechism which is being taught at Christian schools.

It is definitely hard and challenging to give religious teaching in a country where there is 295-C blasphemy Law Act, which allows giving a death sentence and lifetime imprisonment to a person who does blasphemous acts against Islam. But still the Christian schools have the policies which make sure that no such circumstances arise.

"Catholic Board of Education provides books for teaching Catechism in Catholic Mission Schools. This year, the government of Pakistan has made an announcement that Catechism books will be part of the curriculum from the next year onwards for Christian students. This initiative by the government is highly appreciated, as it will give freedom to both communities to learn about their respective religions. (Muslim students study compulsory 'Islamiat'. Ed.)

"Emile Durkheim, a pioneer sociologist described 'religion' with the ethereal statement that it consists of "things that surpass the limits of our knowledge" (1915). He elaborated: Religion is "a unified system of beliefs and practices relative to sacred things, that is to say, set apart and forbidden, beliefs and practices which unite into one single moral community, called a church, all those who adhere to them" (1915).

"Religion performs the key function of providing social solidarity in a society. The belief in the divine existence and the idea of worshipping the Almighty God has brought Christians and Muslims together in Pakistan and unified them. Religious harmony in Pakistan is a concept that indicates that there is love and affection between different religions in Pakistan. Living in a peaceful and harmonious environment is important when the society consists of diverse races and religious adherents..."