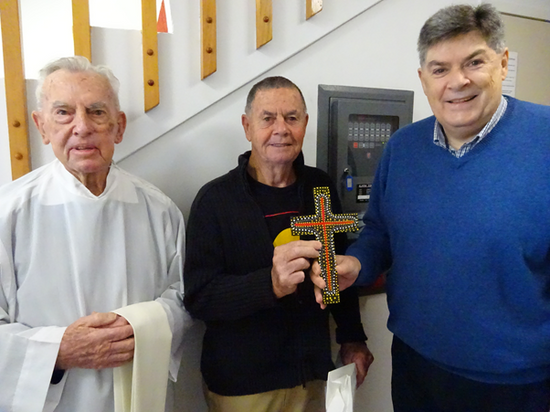 NAIDOC Week is held every year to celebrate and recognise the First People of our land, Australia. The community, under the leadership of Bother Paul Rogers, decided to have a special day to remember our Indigenous Brothers and Sisters and to pray for reconciliation in our country. Thursday 11th July was the designated day and John Allen, from the local aboriginal community, was invited, as our special guest.

The day started with a special morning prayer led by Brother Max Sculley with the theme "VOICE. TREATY, TRUTH." The reading for this morning prayer was a quote from Pope Benedict XV, when he visited Australia in 2008 and was very appropriated for the prayer theme. At 9am Mass of Reconciliation  was led by Father Kevin Ehlefeldt MSC.

After Mass, we proceeded to the foyer of Karlaminda for a special installation ceremony. It began with a prayer led by John Allen. The plague, which was to be attached to the foyer wall, was created by the Bishops of Australia's Conference and recognizes the aboriginal people.  The Blessing read, "Bless this plaque. May it be a constant reminder to all who enter this house that reconciliation must always be a priority for us who live on the Gadigal Land of the Eora Nation. In the name of the Father, and of the Son and of the Holy Spirit. Amen."

The ceremony finished with the singing of the Salve Regina and a cross, painted by John, was presented to the community.