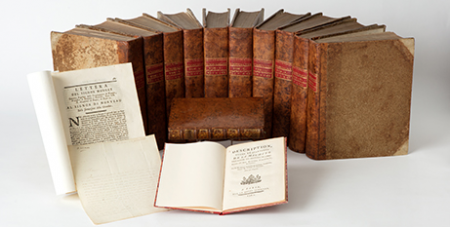 The idea of pulling together rare materials was ACU vice-chancellor Greg Graven's, who raised it first in 2016 as part of the university's cultural remit.

He was concerned about the disappearance of archival treasures in the digital age.

"One of the great challenges with books and rare materials is that periodically there come moments of dispersal when they become terribly vulnerable. Enormous amounts of things are lost, for example, during wars," Professor Craven said.

"In the digital age, books are being thrown out of libraries every day and in a time in the Catholic Church where the religious orders which conducted education for well over 100 years are basically fading to the point of dissolution, there is this massive danger that Catholic cultural history which ultimately is the cultural history of about one in four Australians is going to be completely lost."

The collection of about 1000 books, pamphlets and manuscripts by priests and laity, together with artefacts, includes material from anti-Catholics, such as Baptist firebrand Daniel Allen, who in The Pope v. The Queen (1875) accused the Vatican of conspiring against the British Empire. It is expected to trigger significant scholarly interest.