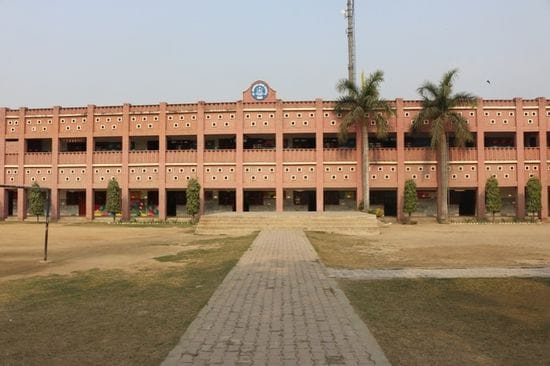 The De La Salle Brothers, Sector Pakistan, has officially accepted the management of St Joseph's English High School, Gujranwala and the mission in the Archdiocese of Lahore.

In a ceremony attended by Brothers, Priests, Sisters and dignitaries including students, parents and staff of the school, Br David Hawke, Visitor (ANZPPNG), officially accepted the management of Gujranwala mission from Rt. Rev. Sebastian Shaw OFM, the Archbishop of Lahore.  It was marked by a formal exchange by Br David and Br Shahzad George Gill the Sector Coordinator, with the Archbishop and his Vicar General Fr. Francis Gulzar. The new mission in Gujranwala consists of St. Joseph's English High School, St. Joseph's Convent School and the St. Joseph's Boys Hostel.

After the formal handover in the school, the Brothers and dignitaries inaugurated La Salle House, the new residence of the Brothers' community.  Archbishop and Br Visitor assisted by Br Shahzad declared the new residence open by the unveiling of a plaque. Several Brothers including all the Directors and Principals of our Institutions in Multan, Faisalabad and Khushpur, were present for the occasion to facilitate the inauguration of the new community, with Br Peter Abraham (Community Director), Br Christie Dorus (Principal) and the two young Brothers Amir and Naqash.

Gujranwala is situated about 45 Kilometer away from Lahore with the 5th highest population in the city of Pakistan. It is an industrial city famous for producing a large number of machinery for various purposes. St. Joseph's English High School was started in the present location, in 1958 and initially managed by Dutch missionaries of OFM and then FIC orders. Later. Fr. Emmanuel Yousaf a diocesan priest, became the Principal from 1985 and he in turn handed over the school to a Lay Principal in 2007.

St. Joseph's English School has at present around 700 students, all boys from playgroup to matriculation (10th class).  One-fourth of the students' population is Christian, the majority being Muslim children, and the staff consists of 35 teachers and other helping employees. Over the years the school was considered as one of the leading schools in the city, especially with regard to its excellence in academic performance. Archbishop and the people of Gujranwala look forward with hope that the school will flourish further, in all areas of educational standards, under the guidance of the Brothers.

Click HERE to read the Address given by Br David Hawke, Visitor.