Posted by Julia Goonan on 7 February 2020 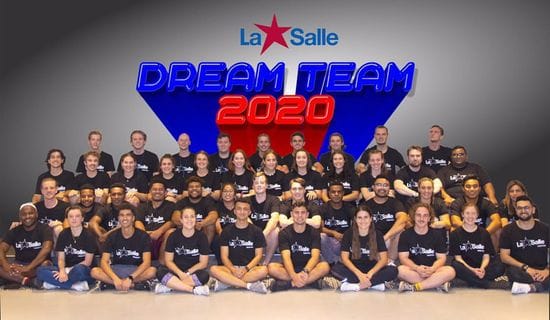 Lasallian Youth Ministers play an essential role in so many communities within the greater Lasallian family. They are an authentic presence of faith, service and community within a school, leading students of all ages to a closer to themselves, other people and God. They serve students through co-facilitating retreats, being a presence in the classroom and playground and inviting students to attend events within the District. The words of St John Baptist De La Salle live through the Youth Ministers within the Lasallian community. Lasallian Youth Ministers have recently gathered for professional development and to aid in the delivery of the Lasallian Student Leadership Seminar for 2020. Some are brand new to the role and some returning to the position.

Due to the positive experience of the students, staff and the broader community in Armidale, O'Connor Catholic College, has employed three Youth Ministers in 2019 and 2020. Returning to the role in Armidale is Brydie Hawthorne and Eliza Clark. Taryn Ramage joins Brydie and Eliza for the first time. Taryn studied at O'Connor Catholic College and was a Lasallian Youth Leader; this allowed her to attend retreats and assist the Youth Ministers with work around the school. Taryn has also gained experience as a soccer coach over the last couple of years and brings this sense of leadership to the role.

La Salle Catholic College, Bankstown introduces 2018-19 Lasallian Volunteer, Cameron Streeter as their Youth Minister. Cameron worked as a volunteer at La Salle Technical College in Port Moresby and brings a wealth of Lasallian experience with him to the role after previously graduating from Oakhill College, Castle Hill.

Luca Amiento joins returning Youth Minister James Biviano at De La Salle College, Malvern. Luca is a St Bede's College graduate who most recently spent his first year out of high school at La Salle College in Perth as a Lasallian Volunteer. On this year way, Luca gained a greater understanding of how to interact with a range of students, in particular, indigenous students. He built a positive rapport with staff during his time in Perth. He looks forward to applying these skills in his new role.

Growing up in Adelaide, working on the beach as a lifeguard, Zani Bates has well and truly found a sense of responsibility leading her to her new role of Youth Minister at St Michael's College, Henley Beach. Her willingness to step up and take on a challenge is also evident outside of the surf; she was the College Vice-Captain and worked as a manager and first aid officer in a part-time job.

Stepping beyond his role of Lasallian Volunteer in New Zealand throughout 2019, Micah Scholes-Robertson will head into Holy Spirit Catholic College, Lakemba as Youth Minister for 2020. Micah was his school College Captain as well as a Hip Hop Dance teacher, bringing his charisma and gifts to the role of Youth Minister.

Owen Wright, a graduate of De La Salle Caringbah and Cronulla, returns to Caringbah seeking to give back to the community that has supported him. He is heavily involved in his local parish and is an avid sports-person. He had positive experiences of Young Lasallians evenings and interactions with former Youth Minister Jake Wedesweiller.

Jonathon Selhurst joins Joshua Cant at St Bede's College, Mentone for 2020. Jonathon is a graduate of the school three years ago and has a passion for basketball. He has a strong sense of community and an appreciation for his faith that he is looking forward to learning and sharing more about in 2020.

We welcome back the following members of the team as they continue their roles in 2020:

We congratulate each of these Youth Ministers, both new and returning and thank them for their willingness to continue the Lasallian faith and inspiring young Lasallians across our District.
Author:Julia Goonan
About: Creative Writer, Lasallian Mission Services
Subscribe via RSS
Tweet