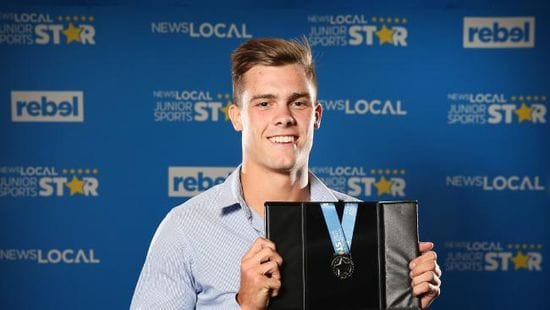 Oakhill College Captain, Ryan Papenhuyzen has been honoured with a News Local medal and $1000 prize in recognition of his outstanding talent as a rugby league player.

17 year old Ryan has excelled with the Balmain Tigers Juniors, scoring 15 tries in 11 games last year, including an amazing five tries in one match.

That helped him gain selection in the NSW Under 18 State of Origin team against Queensland at the Melbourne Cricket Ground where he also scored an impressive try for his side.

Ryan then had the added honour of being selected in the Australian Schoolboys side which defeated New Zealand.

The Oakhill Captain has also earned national selection in the Under 18 Australian touch football side and plays as fullback for his school's First XV rugby union team.

Ryan joins an impressive group of students, including numerous alumni from Oakhill College who have excelled on the sporting field at the national level.

Two other alumni, Kieran and Brandon Jack are members of the Sydney Swans Australian Rules team and their brother Rhys is a former player with the Canterbury Bulldogs and the Balmain Tigers.