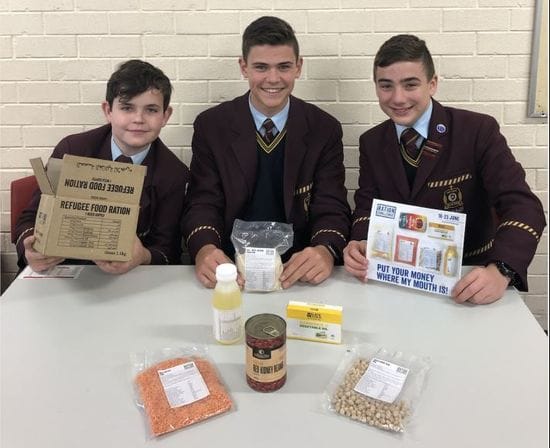 Oakhill College students have been raising money for Syrian refugees, by participating in the Ration Challenge during Refugee Week (16 June to 22 June).

The Ration Challenge, organised by Act for Peace, the international aid agency of the National Council of Churches in Australia, challenges participants to eat the same rations as a Syrian refugee a small amount of rice, flour, lentils, chick peas, beans, fish and oil   for one week and obtain sponsorship to do it. The aim of the Challenge is to raise money and awareness for communities threatened by conflict and disaster.

Following the success of the Ration Challenge Team in 2018 where the College raised over $23,000, the 2019 team, Oakhill4humanrights are well on track to surpass this figure with more donations coming in every day.

The Challenge will have a significant impact on the participants as they maintain their very busy school and work schedules, preparing for assessments, sitting exams, attending meetings, social activities and trying to find alternatives, and get creative with the rations as well as being with others who are not on the challenge.

James Royle, a Year 11 student is participating in the Ration Challenge this year.

"The Ration Challenge has been an avenue for me to live in solidarity with international refugees and endure the deprivations they experience every day. I chose to do the Challenge because I believe food, medicine and education should be inherently available to everyone, and by doing this small action, alongside over 40 members of the Oakhill community, I believe we have all made a humanitarian difference for people who deserve the same rights and freedoms as I have." said Mr Royle

"2019 is my third Ration Challenge. This year my family, including my husband and my two daughters, are also on the Oakhill College Ration Challenge team. There are many things I have learned during this experience that have provided me with a small glimpse into the difficulties faced by refugees. Fortunately, I have a choice to do this. It is not real life for me. My family are having an interesting experience but can look forward to going back to our 'normal' diet. I cannot imagine facing the challenge of living on rations every week, and the thought that some people would not receive rations at all makes my insignificant sacrifice worthwhile." said Ms Castor.

Refugee Week aims to inform the public about refugees and celebrate positive contributions made by refugees to Australia. During this week, members of the Oakhill College community who were not able to participate in the Ration Challenge, were invited to a Ration Challenge lunch consisting of rice, beans and flat bread. Students were privileged to hear from Mohsen Lack, a refugee, who spent many years on Manus Island, told his story of how he came to Australia after fleeing his home in Iran.

"I am so lucky that I am now in Australia. I am not sure what the future holds for me, but to live in this beautiful country is such a privilege." said Mr Lack.