Old boy at the helm 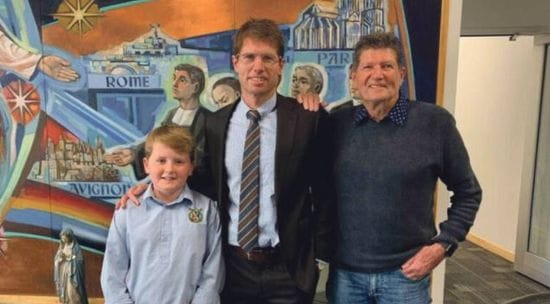 Tim Stuck, the new principal of Francis Douglas Memorial College in New Plymouth, has a lot invested in the college. His father went there, he and his brothers went there and now son Harry is walking through the school gates.

'I'm very much a local,' says Tim. 'After college I was educated at Otago University and then came back to Francis Douglas. I went overseas for a number of years and when I returned I ended up here again. I have a strong connection with the community through the parents and friends who now send their kids to the college. That was a big part of why I wanted to be here and make sure we produce a quality education for our Catholic families in the Taranaki province.'

Tim began as principal of Francis Douglas in term one this year, having been Deputy Principal Pastoral before then. The college has a role of 780 boys from years 7 to 13, with 120 boarders.

The college was founded in 1959 by the De La Salle Brothers, and was named after Fr Francis Douglas, a missionary priest who was killed in the Philippines during the Second World War.

The goal is to provide a holistic education which produces good young men who go out into the community and add value to society, says Tim.

'I think that is the most important thing. It's our duty to provide an education which enables our boys to experience a variety of things whether they be cultural, sporting, academic which will prepare them for life outside of school. In the end we need our boys to be good mates, good husbands, good partners, good colleagues, good fathers, whatever it may be to produce good quality men.'

Tim says the Lasallian values, which are foundational for the college, go hand-in-hand with this respect for others, service to others and social justice.

'What I like about the Lasallian values is that they are very practical. Our five core values respect for all persons, faith in the presence of God, concern for the poor and social justice, inclusive community and quality education are for living out every day, they are not out of reach. We want to produce young men who will live out those Gospel values.