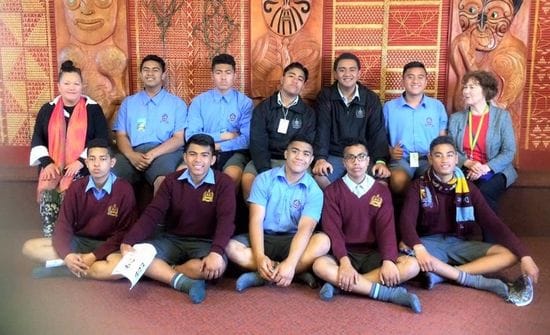 As part of its long tradition of outreach to Maori and Pacific Islander students, a group of  ten Year 10 students from De La Salle College Mangere have participated in a Pacific Island Leaders of Tomorrow (PILOT) program through the Manukau Institute of Technology.

The PILOT Program began six years ago and is aimed at introducing the students to post school educational programs through 11 different tertiary institutions spread across New Zealand's North Island.

Through the program, Maori and Pacific Islander staff from the tertiary institutions act as mentors to the students to encourage them to further their education.

The PILOT program also helps senior students learn more about their cultural heritage given the program includes a look at Pacific Islander leaders from past generations who were well regarded for their skills as orators and voyagers.

While the program was initially only available for students from Auckland schools, it has been expanded over the past two years to also involve Pacific Island students from Hamilton schools as well.

One of the De La Salle Mangere students who participated in the Year 10 program, Paul Faletaogo said he benefited greatly from the program.

"It was a great opportunity for me to develop myself as a future leader and to value my heritage as a Pacific Island student", Paul explained.

"I enjoyed meeting new faces from other schools and creating strong bonds with them", he added.

Another student P.J Mulipola said the PILOT Day motivated him to work harder academically and to start focusing on the diversity of pathways open to him when he leaves school.