Pakistan: Cardinal appeals for equal rights for all faiths 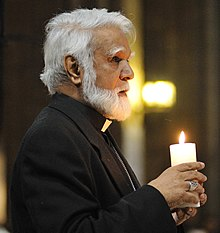 Cardinal Joseph Coutts, Archbishop of Karachi, appealed for people of all faiths to be treated equally in Pakistan. Speaking on Minorities Day yesterday, he said: "The founder of Pakistan, Mohammad Ali Jinnah in his historic speech of August 11, 1947, assured us that people of faith other than Islam would be citizens of Pakistan, with equal rights and duties. Consequently, we should be treated as equal citizens of Pakistan for all the 365 days of the year, without the need to have a Day for Religious Minorities in Pakistan.

The Cardinal said: "We people are Pakistanis, we are not migrants from any other country, we were born and raised in Pakistan and have lived here for centuries before Pakistan's independence. We should not be treated as second-class citizens."

"We have contributed to the development of the Country since the first day of its independence. And we still do it today: the Pakistani Catholic Bishops' Conference has responded to Prime Minister Imran Khan's appeal for the construction of water basins and dams in Pakistan and we have collected donations from all our Pakistani Christians."