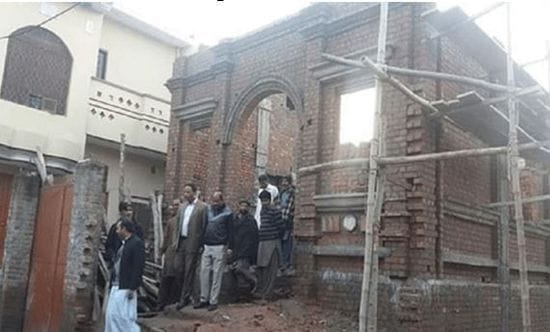 Pakistani Muslim villagers are helping rebuild a Catholic church in the eastern city of Gujranwala.

The foundation stone of St. Mary's Church, which is being rebuilt to accommodate more worshipers, was laid in the Butranwali district of Gujranwala in November last year.

Around 50 Christian families are estimated to be living in the Muslim-majority community where the church is being rebuilt.

"It is an example of true love and brotherhood that Muslim people have opened their hearts and are financing the construction work," the parish priest, Father Samran said.

"A church is the physical body of Christ on earth and we are the living parts of that one body because of the spirit of God. It is the physical representation of Heaven itself and the Holy Mass is celebrated in a church.

"We are glad that not only the local Christian community but also our Muslim brothers are supporting the construction work, which is a true sign of brotherhood and peace."

"The contribution coming from our Muslim neighbours for this holy cause will never be forgotten."

But why is the church so important to this community?

A local teacher who is in charge of the renovation work, said St. Joseph's Parish is one of 27 parishes in Lahore Archdiocese.

"It is one of the oldest mission stations in the archdiocese," Nazir Masih said.

"It was founded in 1953 by Capuchin missionaries from Belgium."

Masih says the rebuilt church will "be a visible sign of our identity and a shelter for the faithful. We need financial support to complete the construction work without any further delay."

When asked, local Muslims said they were helping to maintain a long community tradition of living in peace with one another.

"My small contribution for the House of God has filled my heart with joy which cannot be expressed in words. We [Muslims and Christians] live side by side in peace and harmony. Our community is a shining example for others," he said.