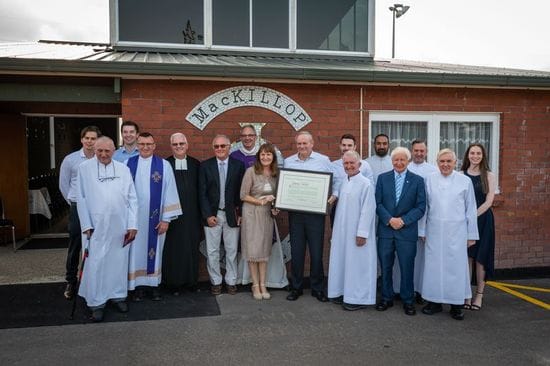 On Saturday 30th November Patrick Walsh was presented with a Certificate and Letter of Affiliation to the Institute.

Affiliation is the Brother's way of recognising and acknowledging people who have not only supported them in their work through outstanding gifts and service but who have also supported them through the personal and fraternal relationship they have shown.Patrick has been associated with the Lasallian mission since 1993, a period of twenty-six years. From 1993 until 2003 he was Deputy Principal at De La Salle College Mangere East.  During that time, he acceded to a request for him to assume the position of Acting Principal for a period of eighteen months until a suitable Brother could be appointed to the position. While at De La Salle College he provided strong support for the Brothers who led the College as well as the Brothers in the local community.

In 2003 Patrick was appointed Principal of John Paul College, Rotorua.  After only three years at the school, he was instrumental in convincing the Board of Trustees to take on the Lasallian charism.

Patrick was one of the founding community members of the local Signum Fidei group at John Paul College.  He remains a faithful member to this day attending the annual retreat of the Signum Fidei group and the regular formation meetings throughout the year.  He is pivotal and valued member of the New Zealand Mission Action Committee.

Patrick has supported the Institute in its Mission through his personal commitment and involvement in various Sector and District Committees. For three years, he was a member of the District Interim Mission Council and has participated in District Mission Assemblies and leadership gatherings. In 2019, his school hosted an Indigenous People's Seminar bringing together Lasallians from across the four countries of the District.

Patrick manifests a favourable spirit and high esteem with regard to Lasallian spirituality. He is a graduate of the Buttimer Program and has facilitated the attendance of five of his staff at the Buttimer program. As a Lasallian Principal and leader, he has ensured that the Lasallian character at John Paul College is evident to all who visit and spend time at the College. The most recent Catholic character review conducted by the Diocese of Palmerston North highlighted the significance and influence of the Lasallian charism at John Paul College under Patrick's leadership. The review affirmed that "The Lasallian charism of the College is actively promoted as the lens through which the school's Catholic identity is visible. Year 7 students were able to give good explanation of the Lasallian charism while older students were able to link the charism to Jesus Christ and the Gospels. The charism is clearly articulated through the support received in providing leadership development to staff. The annual Lasallian Awards for staff recognise commitment to the Lasallian charism. These are highly regarded and respected by all and have permanent recognition in the college with a framed photograph of the recipients displayed in the college."

Patrick's commitment to the poor and marginalised is exhibited through the ongoing support of Camp Lasalle in New Zealand.  In 2019, John Paul College hosted the first Camp La Salle for girls in New Zealand. He has ensured the support of a twinning program between John Paul College and the Bamboo school in Thailand. Most recently he has made a commitment to conduct a scoping exercise, during his sabbatical, at St Pope Paul VI College in Samoa.  At his instigation, John Paul College will host teachers from the College in Samoa as a means of enhancing their professional teaching skills.

Patrick's strong relationship with Brothers is evidenced through his personal interaction with individual Brothers for whom he has provided fraternal support over many years.  Patrick is a person of integrity, with a strong faith.

Congratulations to Patrick on a well-deserved award.