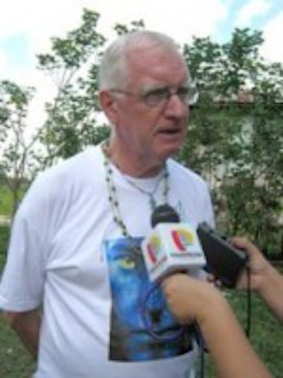 The burnt body of La Salle laybrother Paul McAuley, was found yesterday in the young people's hostel he ran in Belén, Iquitos, in the Amazon rainforest.

Brother Paul, 71, worked to support indigenous tribes who are trying to protect their ancestral lands from destruction by powerful oil and mining companies.

The Peruvian Episcopal Conference said in a statement: "The Bishops' Conference invites the authorities to clarify the facts and find those responsible for this event."

The prosecutor's office of the Province of Maynas (Iquitos area) has decided to "open an investigation into the death of the British religious Paul McAuley, director of the boarding school for young indigenous people in Loreto."
Born in Portsmouth, England, in 1947, Paul McAuley had been in Peru since 1995, where he had founded the 'Colegio Fe y Alegría N° 43' in Zapallal, Puente Piedra district, Lima. He then worked in Moyobamba and San José de Amazonas. For 19 years he lived in Iquitos, where he had been in charge of the radio programs 'La Voz de la Selva', he had participated in various development projects for the populations living along the Amazonas and Huallaga rivers, and he had dedicated himself to raising funds for the young natives who came to Iquitos to study.

In 2010 the Peruvian government tried to strip Br Paul of his residency rights after he fought and defeated an attempt to begin drilling in Amazonia.

In a statement, Jesuit Missions expressed sorrow for the death of Brother Paul McAuley who "worked tirelessly to support indigenous activists and educating people on their environmental and human rights."

Director of Jesuit Missions, Paul Chitnis, said: "Brother Paul McAuley's death is very sad. He showed great courage and determination in standing with people whose rights are infringed by the actions of mining companies. Our thoughts and prayers are with the De La Salle brothers both in Peru and the UK."