Home >  Blog >  Pitching in across the ditch

Pitching in across the ditch 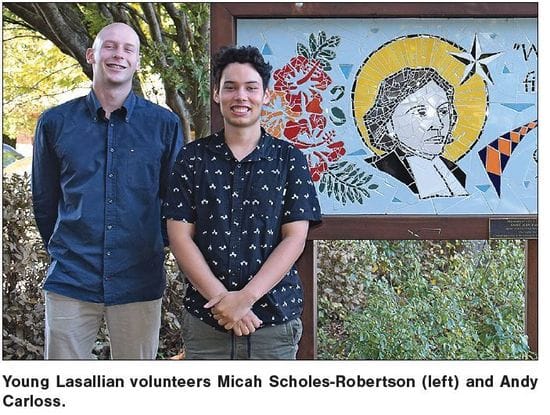 Two young Lasallian volunteers from Australia have found they can have fun in New Zealand while growing in maturity and faith.

Micah Scholes-Robertson and Andy Carloss, both 18, described themselves as "ordinary" and "average" kids from different parts of New South Wales, who came together through the Lasallian Without Borders programme.

Micah studied in O'Connor Catholic College in Armidale, while Andy was a student at Oakhill College in Castle Hill.

Both had previous experience at volunteering and decided to give the programme a try.

"It's all fun. There are no blunt, dull days here," said Micah.

The young men explained that their roles at De La Salle College in Mangere are like those of a teacher's aide.

"Half our time is going into classrooms, working with students who are struggling with their reading or writing. We're also involved in sports basketball and cricket," explained Andy. "We are also in the breakfast  club, where we get to serve students by providing meals for them [because] sometimes they go without."

"It's really like having our skills and abilities used within the school. I played basketball for five years. So, I'm coaching and managing a team of under 17s basketball.

[We're] helping out in the community. Just being a presence," added Micah.

The young volunteers said one of their challenges is finding the middle ground between being role models and being friends with the students.

"Especially when you work with students with special needs and they need help with their reading or writing," said Andy. "Your role changes, because sometimes when you work with that student, you're sort of that old[er] brother. They look up to you and then it will change because they know you from sport. It's very different."

"You get a couple of pranks here and there. There's a lot of banter. It's just being a presence around the boys. Being a friend and being a respectable role model and teacher kind of. It's a hard role to balance sometimes," Micah said.

"Living with the brothers changes your whole perspective on, like, how the brothers are or what they're like. They're just like everyday people. They are very inspiring people," said Micah.

"What we do up here in terms of prayer, especially after dinner, becomes quite meaningful. Because it's the time to sit down and slow down after a fast-paced day.

Through the prayer, you get something out of it, whether it's just a few lines out of the Gospel, you can apply it to your own life," said Andy. "We are surrounded by men that have a very strong faith. That helps our faith grow."

The young men said being a volunteer does not require a special set of skills or a particular talent. The only thing required is one's time.

"What you need for this job is to be willing to put others before yourself. And that reaps great rewards because you see happiness in the kids in the relationships you build," Andy said.