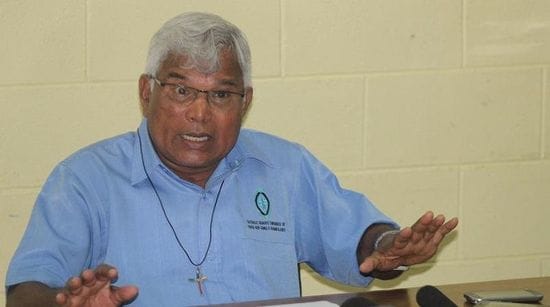 The Catholic Bishops Conference of Papua New Guinea has condemned the use of violence against unarmed civilians after police shot students demonstrating against corruption in the country earlier this week.

The University of PNG students were marching towards the national parliament on Wednesday as part of a long-running campaign against political corruption.

At least 17 people were injured as a result of the confrontation, including one student who received a gunshot wound to the head.

The PNG Government, police and Ombudsman have all announced inquiries into the shooting.

The PNG Catholic Bishops Conference has appealed for calm and has offered to act as a mediator to try and ease the tensions.

The General Secretary of the Catholic Bishops Conference, Fr Victor Roche (pictured) said corruption was an underlying concern in PNG and the country's parliament should address it.

"The Government must strengthen the Ombudsman Commission and fast track the Independent Commission Against Corruption in PNG", Fr Victor explained at a media conference this week.

"It must also depoliticise the public service and security forces", he added.

"The Catholic Church is ready to mediate as a neutral third party in a Melanesian way to find a peaceful solution to the conflict", Fr Victor said.

"We appeal to all parties not to engage in any violence and there should especially be no violence carried out by security forces on unarmed civilians".