Home >  Blog >  Pope Francis: 'He who builds walls will end up imprisoned by them'

Pope Francis: 'He who builds walls will end up imprisoned by them' 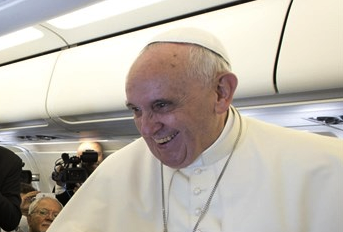 In an informal press conference with reporters on the papal flight back from Morocco, Pope Francis touched on various topics including dialogue with Islam, the need to protect the rights of migrants, freedom of conscience and the case of Cardinal Barbarin.

Asked what he thinks the consequences of this visit will be for world peace and dialogue between different cultures, Pope Francis said: "I will say that now there are flowers, the fruits will come later."

He expressed satisfaction for having been able to talk about peace, unity and fraternity during the visit to Morocco and also during the previous one to Abu Dhabi, during which he recalled the important Document on Human Fraternity that he signed together with the Grand Iman of Al-Ahzar.

He upheld the religious freedom he witnessed in Morocco and the respect with which all brothers and sisters are welcomed.

"This is a beautiful flower of coexistence that promises to bear fruit. We must not give up!" he said.

The Pope acknowledged there are still difficulties because, he said: "In every religion there is always a fundamentalist group that does not want to go ahead and lives on bitter memories, on the struggles of the past, looking for more war and also sowing fear."

But he reiterated the need to continue to work for fraternal dialogue, pointing out that dialogue can only flourish when there is a human relationship at various levels.

"If it is human, it is with the mind, the heart and the hands, thus agreements are signed" he said.

And he referred to the signing in Rabat of the common appeal for Jerusalem, which he said, was "a step forward made not by an authority of Morocco and by an authority of the Vatican, but by brother believers who suffer to see that this city of hope is still not as universal as we all want it to be: Jews, Muslims and Christians".

"We are all citizens of Jerusalem, all believers" he said.

Speaking of those who prefer to build walls instead of bridges he said "they will end up imprisoned by the walls they have built" while those who build bridges will go a long way. Pope Francis conceded that building bridges takes a great deal of effort.

He revealed he has always been touched by a phrase from Ivo Andrich's novel 'The Bridge on the Drina' in which he says that the bridge is made by God with the wings of angels so that men can communicate... "

Instead, walls are against communication, he said. They are for isolation and those who build them will become prisoners.

Regarding the question of Muslims who convert to Christianity and who are not safe in all countries, the Pope noted that the Catholic Church removed the death penalty for heretics from the Catechism 300 years ago, because, he said, the Church has grown in consciousness and in the capacity to understand its own faith which in turn promotes respect for the person and for religious freedom.

Acknowledging that in some countries there continues to be a problem of conversion he upheld the example of Morocco where, he said, people of all faiths are protected.

But he also highlighted limitations of freedom of conscience in some Christian countries where, for example, some doctors are deprived of the right to conscientious objection when it comes to euthanasia.

"How has it happened?" he asked "that the Church has gone forward and Christian countries are going backwards?"

Today, we Christians, the Pope added, are in danger of some governments taking away from us the freedom of conscience: that is the first step towards freedom of worship.

Regarding the situation of French Cardinal Barbarin who is under investigation in France for allegedly covering up clerical sexual abuse, Pope Francis reiterated the juridical principle that at present there is the presumption of innocence and the case is open.

He invited the journalists to think twice before issuing a media condemnation until the Court gives the final judgement.

Stressing Pope Francis's repeated appeals to policy-makers and government leaders to protect and help migrants, one journalist highlighted the fact that European politics are going in the exact opposite direction and that populist policies reflect the opinion of mostly Christian voters. "How do you feel about this sad situation?" she said.

"I see that so many people of good will, not only Catholics, () appear to be gripped by fear" that is the fodder of populism, he said.

Fear, the Pope continued, is the beginning of dictatorships.