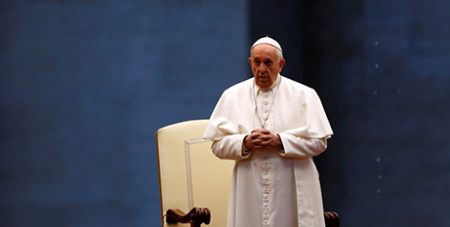 Francis said the COVID-19 pandemic was a "place of conversion", a chance we must not let slip away.

And he said the Church would come out of the crisis with its institutions reconfigured according to the spirit of early Christianity, and less attached to "certain ways" of thinking.

Francis was speaking to papal biographer Austen Ivereigh in his first English language interview with Catholic media and his first with a British journalist.

He focused on his response to the Coronavirus pandemic.

"What we are living now is a place of conversion, and we have the chance to begin. So let's not let it slip from us, and let's move ahead," he said.

We have to respond to confinement with creativity. "We can either get depressed and alienated through media that can take us out of our reality or we can get creative."

He explained what he meant by conversion: "Go down into the underground, and pass from the hyper-virtual, fleshless world to the suffering flesh of the poor. This is the conversion we have to undergo. And if we don't start there, there will be no conversion."

The Pope sent a recorded audio reply to a series of questions, and in one of them Dr Ivereigh asked if the 83-year-old Roman pontiff saw the future of the Church as "less attached" to institutions.

By Christopher Lamb, The Tablet