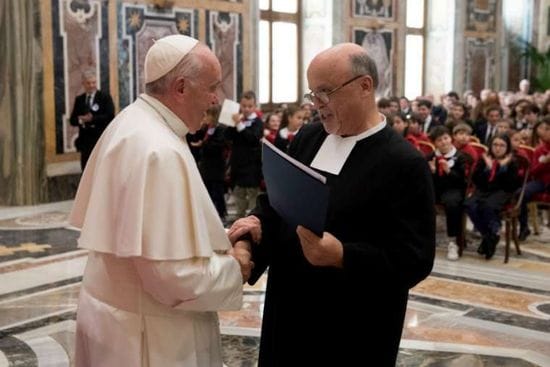 On the 300th anniversary of St. John Baptist de la Salle's death, Pope Francis urged the Lasallian Brothers to continue their educational mission with the zeal of their founder.

"Dear spiritual children of St. John Baptist de La Salle, I urge you to deepen and imitate his passion for the least of these and the rejected," Pope Francis told the Brothers May 16 in the Vatican's Apostolic Palace.

The pope called the brothers to bring a "culture of resurrection" into the schools where they serve, especially in contexts where the "culture of death" prevails.

St. John Baptist de La Salle, a 17th century French priest, established a lay community to offer a Christian education to the children of the poor that later grew into a new form of consecrated life, the "religious brotherhood," in which "lay religious" take vows of poverty, chastity, and obedience without ordination.

Pope Francis praised La Salle's bold reforms of teaching methods, calling him a "a pioneer in the field of education."

La Salle was one of the first pedagogues to emphasize classroom teaching in the vernacular rather than Latin. He also divided pupils into learning groups for more effective work, set up Sunday schools for adults, and rehabilitative programs for juvenile delinquents and prisoners, Francis explained.

"He dreamed of a school open to all, so he did not hesitate to face extreme educational needs, introducing a method of rehabilitation through school and work," the pope said.

Click HERE to see the translation of Pope Francis' address