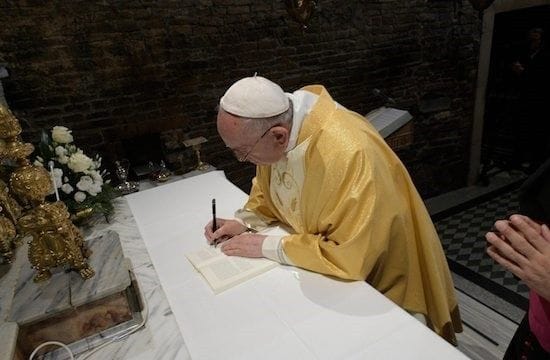 Pope Francis on the Feast of the Annunciation signed his apostolic exhortation to the world's young people representing the fruit of the October Synod of Bishops' special assembly on Young People, the Faith, and Vocational Discernment.

Greeting some 10,000 people, many of them families and young people, in Loreto, Italy, on March 25 the pope told them Mary can help all believers dedicate themselves to "the path of peace and fraternity, founded on welcoming and forgiving, on respect for others and on love as a gift of oneself."

"Mary is the model of every vocation and the inspiration of every vocational pastoral program: Young people who are seeking or questioning their future can find Mary to be the one who helps them discern God's plan for them and find the strength to follow it."

The pope's exhortation titled in Spanish, Vive Cristo, esperanza nuestra, (Christ, Our Hope, Lives) is based on discussions and inputs from the October synod.

The pope signed the document at the altar inside the small, one-room Holy House of Loreto that contains the walls of what tradition holds to be the house in which the Blessed Mother lived when the Angel Gabriel announced that she was to give birth to Jesus.

It was to be released to the public April 2, the anniversary of the death of St. John Paul II. The intention was "to connect two pontificates, so loved and close to the younger generations," said Alessandro Gisotti, interim director of the Vatican press office.

The pope said he wanted to sign the document on the date and at the place of the Annunciation to highlight how the Annunciation reveals what is necessary in the vocational process: listening to God's word and God's will.

"One must be ready and willing to listen and welcome God's voice," which is hard to recognize if life is too "noisy" or agitated, he said. Quiet reflection is necessary, he said, if one is going to be able to go below the surface and discover the "moral and spiritual forces" at work in one's life.

Young people and families are not two separate realities, he said, pastoral programs and outreach must be dedicated to both at the same time because "very often young people are what their family gave them with their upbringing."

"It is necessary to rediscover God's plan for the family," he said, which is "founded on marriage between a man and a woman," and to emphasize the family's "great and irreplaceable" role in serving life and the community.

He highlighted Mary as the model Christian disciple and suggested that today's young people try to imitate her example as they search for God's plan for their lives.

Mary lived a multitude of family relationships she was a daughter, a fiancée, a bride and a mother, so all young people, no matter what their role in life and calling from God, can find an example and inspiration in her, the pope said.

Earlier Pope Francis held a Q&A session with the students of a Catholic school in Padua, and told them to find their main point of reference in themselves, with the guidance of their priests, parents, and grandparents.

"Passion in the life of a young person is important. A life without passion is like plain pasta without salt," the pope said March 23 during a meeting at the Vatican with students and staff from the Barbarigo Institute school in Padua.

Three students were chosen to ask Pope Francis questions, and all three queries had to do with making important choices in life.

"You will find the most important point of reference for your choices inside yourself; it is the reference of your own conscience," which becomes clearer through prayer, the pope said.

"Intellect is valid and necessary, but it is only one of the languages that you must have," Pope Francis said. The others are having a heart capable of feeling and hands able to provide concrete help.

And, as far as figuring out vocations and careers, Pope Francis said talking to God in prayer -- "not like parrots, 'blah, blah, blah,' but from the heart" -- is essential.

But the pope warned the young people that making life choices is not easy. "In the face of a decision there is always a moment, a space of solitude. One cannot make a life decision in someone else's name; each person must do it for him- or herself."

"Do not be afraid of these moments of solitude," the pope told the young people, because struggling with a decision while feeling alone or alone with a potential future spouse will later give "the certainty that you chose well."