Home >  Blog >  Prayers for the victims of bombing in Lahore

Prayers for the victims of bombing in Lahore 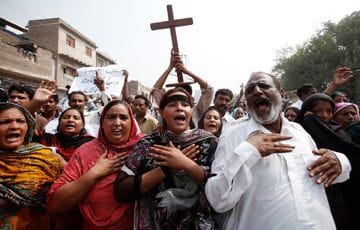 At least 70 people have been killed and over 300 injured, following an attack on a public park in Lahore where Christians were gathering celebrating Easter.

The park was crowded with families, with many women and children among the victims of the suicide bombing.

A Pakistan Taliban faction said it carried out the attack.

Brother Visitor David Hawke has written to Lasallians in Pakistan, conveying the thoughts and prayers of all Lasallians over the attack:

This morning I awoke to the awful news of a targeted bomb attack in Lahore.

The fact that Christians and a big number of women and children were targeted on Easter Sunday is beyond reasoning.

There is no way that I can understand why people can be so inhumane and cowardly.

The Christian minority in your country must live in fear and yet they have the courage to profess their faith so admirably. The Brothers form part of the Christian minority and yet you are at the forefront promoting inter-faith peace and harmony through the Lasallian schools.

Be assured of the prayers and thoughts of all Lasallians in the District at this time.

May the peace promised by the Risen Lord rest on each of you, all Lasallians and your country.