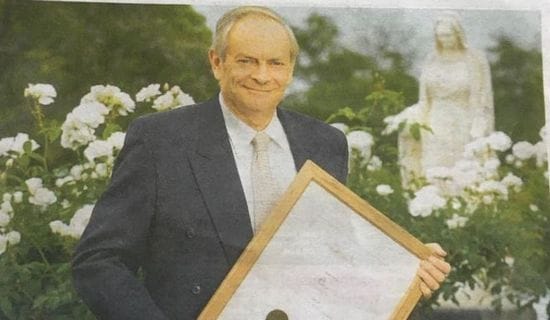 What would you do if you won Lotto and got asked to travel the world, seeing and doing something you're passionate about?  In a nutshell, that's what one Principal got.

John Paul College principal Patrick Walsh was surprised to open his email to see that he had won the Woolf Fisher Fellowship, an eight-week international study visit worth $35,000. What makes it even better is that he did not even apply for it.

The late Sir Woolf made it clear that an element of surprise would always be associated with the announcement of the awards and no applications were accepted.

More than 1100 principals and teachers from around New Zealand have received the award over nearly 60 years.

It is a great honour, and something you don't expect to get something like this, I guess it's like winning Lotto, Walsh said.

In his element, Walsh will begin his journey at Harvard University for a week-long course among world education leaders.

From there, the focus of the trip will be around the best practice of learning support, particularly for dyslexia, dysgraphia and autism.

"We have a large number of children at John Paul College who require learning support, and, while we do an excellent job with them, it's always good to see how other schools and jurisdictions deal with learning support".

He will also travel to London and visit schools to learn about some of the leading practices in the realm of learning support.

Prague and Belgium are also on the itinerary.

He also plans to admire the architecture and history of medieval Prague and looks forward to visiting his brother who lives in a castle in Belgium.

"I'm hoping to stay in the castle a little while," he said.

The grant allows for the partner of the winner to join the trip, and Walsh said it was fitting his wife, who is the special needs co-ordinator at the school, will go too.

"It will be good for professional development for her as well", he said.

The Ministry of Education supported the award and would provide relief for Walsh which meant he would keep his salary.

"The award is good for Rotorua", he said.  It showed the small city was up there with top Auckland schools.