The story of the De La Salle Brothers Mission began in 1946, at Bomana, NCD, as described in a previous article.  It had grown out of the drive in the late 1800's of Catholic and other Christian traditions from colonial nations offering a new, unknown religion to the PNG tribes. A core strategy was to recruit new believers as catechists, to teach in remote stations and to build schools. The Lasallian Mission was hugely supported and shared by other Catholic missionaries, who had laboured for decades in the Melanesian land, e.g., the Divine Word Missionaries (SVD) brothers and priests, lay missionary volunteers, and Sisters of Our Lady of the Sacred Heart (OLSH). Christian Agency education consolidated, but the nation's public schooling system took flight with Independence in 1975.

One primary school, to become important in the Brothers' work, was begun by lay missionaries -Dan Hourigan, Evan Duggan (both later priests) and Don Craig in 1953. It was on a property called Mainohana, not far from the Government Station at Bereina, 160 km up the coast from the capital. Branching out from their Yule Island base in 1958, Brothers Lucien and Anthony, with the young indigenous Br. Peter Keaga took over this mainland school, with boarders. There were soon 250 students in Grades 4,5 and 6. A number of Australian 'Pacific Asia Lay Missionaries (PALMS) men and women were part of staff. 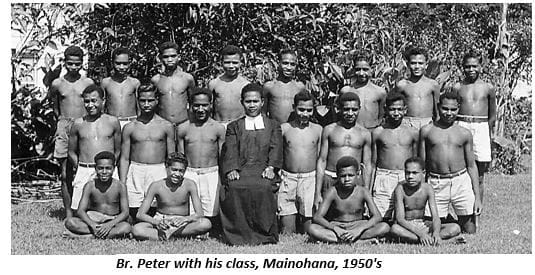 Extolling the reputation of the Brothers was Bishop Klein of the Bereina Diocese, saying in 1960: "The De La Salle Brs have been a great advantage for our Mission. Without them we would not have reached the standard of education that we have attained". The OLSH Sisters were also involved, and in 1964, with the arrival of Br. Columban as headmaster, the secondary classes began. In 1966, more secondary students from Yule Island arrived. This venture was very welcome for the Brothers, having a foothold in the development of national education.

Philip Cahill, in his history comments: "Life at Mainohana provided many challenges with regular floods and the difficulty of maintaining supplies and materials, leading the Brothers to become versatile in all manner of fields...(outside) classroom teaching. Br Lucian's first aid skills saw his expertise called upon, and even led him to develop the unusual skill of milking the venom from the poisonous snakes so prevalent in the area - the Papuan Black and Taipan."

The Brothers, with their Lasallian education methods, built up student technical and agricultural skills, developed for the school's self-reliance. Isolation bred ingenuity. Brs. Brendan Crowe, Peter Mays and Bede Mackrell (Headmaster 1984-94) were prominent; the Brothers teamed with the farm workers and mission station personnel to produce a thriving whole-of-mission success story. In 1994 co-education came via the amalgamation with the OLSH Sisters school on Yule Island.

Back to Bomana, First Foundation, 1964

The Brothers were invited to start a secondary boarding school back at Boroko, under the very competent leadership of pioneer Br. Patrick. He was described by a Brother of the time as "tall and athleticfull of energy and enthusiasm, quietly spoken and always a gentleman".  Others on the staff were Brs. Peter, Lucian and Leo Neville. Classes began at 8.30am and continued till 4.30pm, when there would be a work parade, showers and a half-hour study before the evening meal.

Some Administration officials believed Mission schools spent too much time on Religion. But the soon top-class academic performance at Bomana proved the lie to that. Within five years the College produced 5 students in the top 10 in the Territory, and the top student). The consistently high standards produced by the De La Salle High Schools at Bomana and Bereina were really a tribute to the dedication of both the teachers and students. In 1965, Br. Peter Keaga, the first PNG Brother, and already the first Papuan to be commissioned as a Cadet Lieutenant, gained a certificate of School Management & Administration, this as a Primary School Inspector.