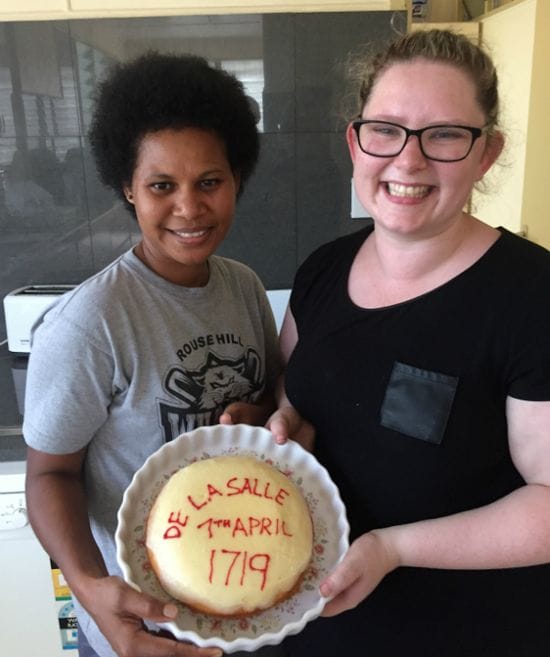 Lasalle Technical College Hohola and the Brothers' Community were pleased to host volunteer, Chantelle  Jeffers, for the two weeks in April leading up to Easter. Chantelle had been looking for an opportunity to contribute to mission in a developing country - and the Hohola community was only too happy to provide that opportunity!

" For many years I had felt a wish to contribute to the mission of an organisation which worked with the poor in a developing country. As a 16-year-old I had been a member of a Marist REMAR caravel which visited Wilcannia in far-western NSW. This trip gave me my desire to be a teacher which I fulfilled by becoming a Catholic Primary School teacher in Warragul, Victoria, where I had attended school myself and the inspiration to contribute to the education of those really in need.

"Where there's a wish and Google there's a way! And Google led me to the Lasallian Foundation and a series of conversations with Miranda Chow, CEO and ultimately to LTCH and the Hohola Brothers' community. And I have enjoyed every aspect of the experience."

In addition to teaching a number of classes, Chantelle led an in-service for teachers on Lesson Planning nervously (she says, but it did not show) following in the footsteps of Ria Greene from St Bede's College Mentone, who had conducted an in-service earlier in the week. On Miranda's advice Chantelle had brought with her three large suitcases of library books and teaching materials which were gratefully received by staff.

To the great culinary and dietary satisfaction of the Brothers' community, Chantelle also gave a daily cooking lesson to Madeleine, the Brothers' new housekeeper, leading to a standard in cooking cakes which would be the envy of Masterchef!

LTCH and the whole community record their appreciation to Chantelle and their hope that she will return, no longer as a "random", but as a valued member of our Lasallian community.