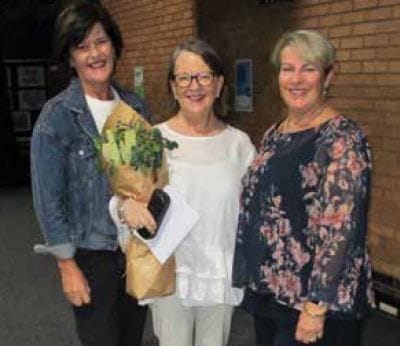 This year the women on staff at the College celebrated International Women's Day with a breakfast in the PAC at Tiverton. Among the guests were three women, who collectively have taught at the College for more than 100 years.

In 1981, Christine Thompson (nee Andrews) and Clare Kennedy-Curtis (nee Kennedy) arrived at the College, a year later Jacinta Ryan (nee de Vries) joined them. Working at the junior school, now Tiverton, the three women have made an enormous contribution to the education of literally thousands of young men who have passed through the College since then. Roll Call is proud to share some of their reflections with our readers.

Christine Thompson started her career at the College in 1981 as a Year 7 classroom teacher. Now the Humanities Learning Area Team Leader and VCE History Revolutions 'guru', Thompson has seen a lot of change during her tenure, especially in the opportunities for women.

"The difference now is that female staff feel more empowered and confident to apply for leadership roles whereas this was not the case years ago."

"There are more opportunities available for women to access leadership positions and we are encouraged to apply when positions become vacant."

As well as her reputation as a respected teacher and colleague, Thompson was been instrumental in supporting many of the College's social justice initiatives. Along with her husband, and fellow long-term staff member at De La Salle College, Charles Thompson, whom she met in 1981 at the College, the pair embody everything that is "Lasallian." Mrs Thompson was one of the people who developed offshore social justice opportunities for students.

"A trip to the Philippines in 1986, opened my eyes to the possibilities for our young men to contribute to a world far outside their comfortable lives in Melbourne."

Subsequently, she alongside a dedicated group of teachers who, along with Br Denis Loft (1965), established the annual Year 12 volunteer program in India. She participated in four trips to India, known as 'Coolies.'

"Participating in the Coolies program was nothing short of amazing."

"Observing our young men come to terms with conditions so very different to their own and working to improve the living and learning conditions of the students at these De La Salle partner schools was so rewarding."

As she approaches her 40th year on staff, Thompson said it is the ethos and spirit of the De La Salle College community which has compelled her to stay.

"The atmosphere in the College, both amongst staff and the students, and the Lasallian ethos passed on by the Brothers, is something I value and believe enables us all to lead the students during their journey here to develop into fine men."

Clare Kennedy-Curtis also joined the College in 1981 as a full-time Teacher/Librarian working at the Tiverton Campus. She still works in the library, teaches primary classes, VCAL Literacy and is a dedicated St Edwin's House Mentor.

As well as her role as a teacher/librarian, over the last 39 years she has channelled her energies to improving the welfare of students through a range of cocurricular activities, committees, overseas excursions, camps, retreats and the sporting life of the College. She rates managing the 2nd XVIII as a career highlight.

"There are more opportunities for women to take up positions of leadership and this balance can only be of benefit to the students."

"I can confidently say a healthier balance will continue to empower these young men."

"When I started, De La Salle was full of nurturing, intellectual men, professional and empathetic women and the humour and dedication shared by all staff was magical."